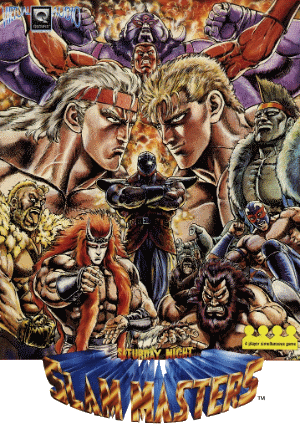 CWA: Capcom Wrestling Association - The world's largest among the bunch of wrestling associations which mushroomed in 1980's. With its legendary champion disappearing, CWA is going to host a world tournament called "CWA Crush Carnival." Use your tactics and techniques to beat out terrifying contestants.
Game description from the FM Towns version.
Advertisement:

Saturday Night Slam Masters (Muscle Bomber: The Body Explosion in Japan) is a wrestling/fighting game released by Capcom in 1993 for the arcades. The original game is a typical wrestling game set on the viewpoint used by fighting games, with the winning conditions being either a 3-count pin, 20 seconds ring out or forcing the opponent to give up. The story revolves around the CWA (Capcom Wrestling Association), which was formed by 8 different wrestling groups all led by Victor Ortega. When Ortega suddenly vanishes, the group falls into chaos and the BWA (Blood Wrestling Association) takes advantage. A tournament is started to find the new chief of the CWA. The game itself has no actual story, and the endings are just the winning character bragging about his victory.

The original has a roster of 10 wrestlers, almost all of which have dub name changes. They are presented English name first:

An Updated Re-release titled Muscle Bomber Duo was released exclusively for the arcades, focusing on the tag team mode of the original, adding new moves to each wrestler and finally allowing same character selection for all four players, followed by console ports of the original game on the Super NES and Genesis. Finally, a sequel was released, also exclusive to the arcades, under the name Ring of Destruction - Slam Masters II (Super Muscle Bomber: The International Blowout in Japan), which ditched the wrestling mechanics for a pure fighting game experience (in other words, it featured round-based matches and victory by K.O.), under the excuse of Scorpion changing the rules. Outside that, the game follows the same non-plot as before, now with Ortega coming out of retirement to hold the final bout for the championship. The ten original wrestlers are joined by four new ones: