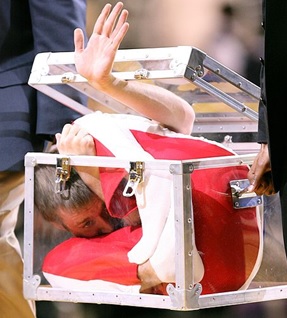 Don't try this at home!
Contortionists are circus performers whose act mainly revolves around bending themselves like pretzels. Occasionally, they will incorporate other things into their act such as spinning Hula hoops on an up stretched leg or shooting bows with toes while bent over backward.
Advertisement:

While not required, many acts involving rope climbing and or elevated dangling from aerial silk, tissue, The Spanish Web, aerial hoops and corde lisse frequently involve contortion as well. More mundane sets just give the performer a chair or have a strong man hold them up.

Performers of this type are generally divided into front benders and back benders. Some can fold both ways but most still do one way better than the other. Anyone who can perform a split beyond 180 degrees also might find work in this area, touching a knee to a shoulder or feeding themselves with their feet work too. Some more extreme cases involve a contortionist slipping into a clothing trunk or barrel and those with good pain tolerance may dislocate their joints to bend them even further.

A variant is the rag doll, where a flexible person will be violently shaken or otherwise abused by someone in an attempt to convince the audience they are not actually alive.

Also see World's Strongest Man, Girls With Mustaches, The Freakshow, and Non-Ironic Clown, other circus acts which sometimes go hand in hand with this one. Circus brats are also natural companions. A Staged Pedestrian Accident is a common scam contortionists are not necessary for, but excel at. For more fantastic stretches not usually seen in this performance art, see Abnormal Limb Rotation Range and Rubber Man. See Flexibility Equals Sex Ability for when contortionists are played for sex appeal.

If a person without unusual flexibility undergoes the sort of contortions associated with this trope, the results can be messy.