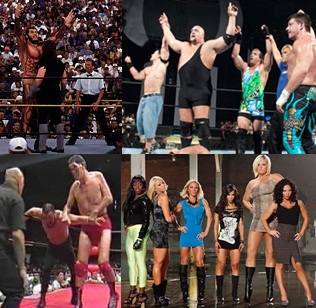 "That right there is one of the most basic moves in the history of wrestling but when it's applied by the Big Show it could be a finishing move."
— Jerry Lawler, on the side headlock take down.
Advertisement:

In your basic Professional Wrestling promotion, there's one guy who's much bigger than everyone else. Usually at least a head taller than the next-tallest man on the roster, and a mountain of muscle (and fat) to boot. So, of course, the promoters advertise him as an unstoppable killing machine, regardless of the big man's (lack of) talent.

Such men are almost universally introduced and pushed the same way as "monster" heels, sometimes mixed with a Foreign Wrestling Heel vibe. Because of their billing, they will usually be pushed straight to the top to face off with the top Face, whom they'll generally squash in their first meeting, to give you an idea of how Herculean an effort will be required to defeat them.

An important distinction between The Giant and just being large is that The Giant will have sheer immovability and too often a noticeable lack in the talent department, having a very small repertoire of basic strikes and throws or not possessing Wrestling Psychology. While some with the Giant gimmick will disprove some of the stereotypes by showing a more diverse range of moves along with decent fitness and mobility, their in ring style and psychology are still built almost entirely around being large and hard to budge, as it is the easiest/most credible way to build matches with guys like them. And they will rarely be in a hurry either which, when worked well, can go a long towards making them seem that much larger. Jim Ross used to refer to these types of wrestlers as Hosses, after Hoss Cartwright from Bonanza.

Moves done by giants enough to typically become associated with them first and foremost include the chokeslam, being the obligatory move to show their raw power and simple approach to wrestling, with clawholds if the wrestler has particularly huge hands not being far behind. The classic big boot or stationary kick right to the face of a running, puny opponent is another and, ultimately, if the Giant has a big belly or otherwise a heavy torso, a big splash is the most adequate finishing move.

If the angle goes on long enough, The Giant might get a Heel–Face Turn, rebelling on the manager who brought him in and going his own way. This usually results in them no longer being unstoppable.

Related to Muscles Are Meaningful (large means slow and strong). Comparable to Smash Mook. For mythical giants, see Our Giants Are Bigger.