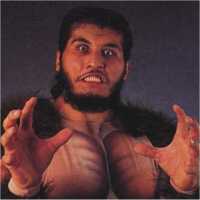 As Giant González in WWF. 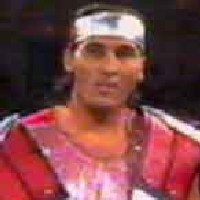 As El Gigante in WCW.
"I WANT DA BELT!"
Advertisement:

Jorge González (January 31, 1966 – September 22, 2010) was an Argentinian basketball player, professional wrestler and actor known for his work for WCW and New Japan Pro-Wrestling as El Gigante and for WWE as Giant González. He is remembered, unfortunately, for being one of the worst professional wrestlers of all time. He debuted for WCW in 1990, after an injury ended his basketball aspirations. While he never won a title, he came in second behind "Stunning" Steve Austin for Pro Wrestling Illustrated's "Rookie of the Year" Award for 1990. He left WCW in 1992 and arrived in WWE at Royal Rumble 1993, surprising everyone by eliminating The Undertaker. At WrestleMania IX, he became the third victim of The Undertaker's Streak, losing by disqualification for using an ether-soaked rag on Taker, the only time this ever happened. He left after losing the feud and went back to New Japan, and had his last match for Genichiro Tenryu's Wrestle Association R promotion in 1995. He died of diabetes and severe heart issues on September 22, 2010 at the age of 44, after years confined to a wheelchair.