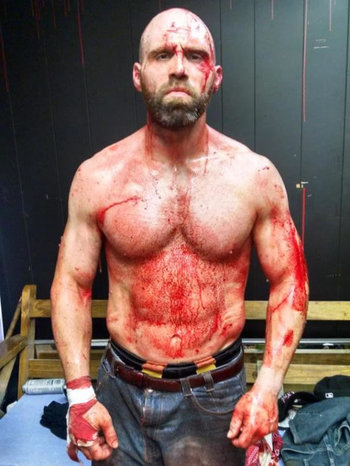 Eastern Block. H8 Club. Gang Affiliated. MDK, ALL FUCKING DAY! The Man. The King. The God of This Shit. Nick Fuckin' Gage.
"...I'm sure that they, along with everyone else who has seen Gage work, pity Rickey Shane Page, Allie Kat, AJ Gray, and all the other fools who have lined up to take a shot at the GCW title which Gage has held since December 16, 2017. It’s a title they’ll have to kill for, because Nick Gage will die for this shit."
—Fanbyte.com's article on the man
Advertisement:
"Nick Gage is for the children."
—Jordynne Grace

Nick Gage is a Professional Wrestler best known for his work in various independent promotions, most notably for CZW, BJW, and GCW. He got his start as one of the CZW originals, being notable for appearing on every card for the company right up until 2010... when he was arrested for bank robbery, and spent 5 years in prison. This did little to actually stop his career, as he simply moved on to GCW in 2015, where he became their longest reigning Heavyweight Champion at 722 days. He became so popular and reknowed for his bloodthirsty and over-the-top battles in GCW that they began running a special deathmatch tournament called the Nick Gage Invitational. He was inducted into the CZW hall of fame in 2009, and was honored by Sports Illustrated in 2019 as being in their top 10 wrestlers of the year. In 2021, he was the focus of an episode of Dark Side of the Ring's third season. On the 21 July 2021 edition of AEW Dynamite, Gage was announced as Chris Jericho's opponent in a No Disqualification match as part of the latter's Labors to challenge MJF.

These Tropes are MDK: