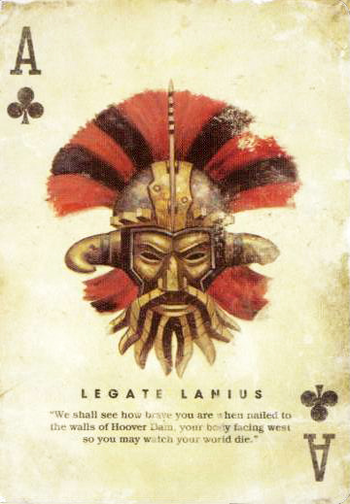 "I am very smart. I went to the best Medacad in Osiris, top three percent of my class, finished my internship in eight months. "Gifted" is the term. So when I tell you that my little sister makes me look like an idiot child, I want you to understand my full meaning. River was more than gifted. She... she was a gift. Everything she did, music, math, theoretical physics—even-even dance—there was nothing that didn't come as naturally to her as breathing does to us."
— Simon Tam, Firefly
Advertisement:

The Ace is someone who is ridiculously good at what they do, whatever that happens to be, and everyone knows it. People look up to them, envy them, and are in awe of them. They have a reputation for doing the impossible, and may be Shrouded in Myth, as people are unable to separate their real accomplishments from unfounded rumors.

In a work revolving around a specific activity, any kind of Serious Business, the Ace will be the best at it. Other characters may refer to the Ace as "the best of the best" at this activity. In works lacking that sort of focus, they'll probably be extremely talented at everything.

The Ace is rarely The Protagonist, typically acting as the living embodiment of Always Someone Better. They'll drive the protagonist to greater efforts either out of envy or by inspiring them. As such, if they're a main character, expect them to be either The Rival or The Mentor. If they're a minor but reoccurring character, then they'll almost certainly be Hero of Another Story.

However, The Hero typically evolves into an Ace by the end of their story by virtue of having the most potential to unlock. By the time this happens the original Ace will likely be hit by The Worf Effect a few times or both will be standing on equal ground. However, The Hero starting the story as an Ace is not unheard of, and it can serve as a reconstruction.

The Ace is common in the Romance genre, but what they are good at usually has little effect on the romantic plot. Some Dystopian settings feature an Ace, though they tend to be the victim of Tall Poppy Syndrome to show they're also good at dying. Protagonists in role-playing video-games are almost always Aces.

If the Ace's talent is operating combat vehicles, then they're an Ace Pilot, but note that not all ace pilots are an example of this. If the Ace's private life isn't nearly as great as it seems from the outside, then they're a Broken Ace. Though this trope is often played for comedy, Ace's impossible talents being the joke. If (s)he isn't really that amazing, then see Feet of Clay or Fake Ultimate Hero. If their talent is due to intelligence instead of simple awesomeness, see Impossible Genius. If they perform exceptionally well within a specific field but are hopeless anywhere else, see Graceful in Their Element. In a High School setting, they're typically the Big Man on Campus.

Related to the Renaissance Man, who is capable of a myriad of seemingly unrelated talents. See Ultimate Life Form for a character that is literally perfect. See World's Best Warrior where this is solely about combat success. Compare Master of All and Broken Ace. Contrast Loser Archetype and Classical Anti-Hero. Has nothing to do with Asexuality (despite "ace" being a common shortened form of "asexual").