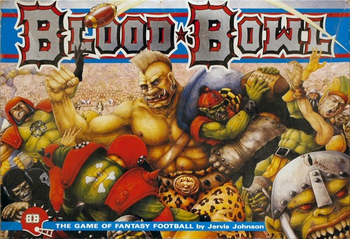 "Good evening sports fans. I'm Bob Bifford, welcoming you to the Blood Bowl for tonight's contest. You join a capacity crowd, packed with members from every race from across the known world, all howling like banshees in anticipation of tonight's game. Oh, and yes, there are some banshees..."
Advertisement:

Blood Bowl is a fantasy boardgame made by Games Workshop, creators of Warhammer and Warhammer 40,000.

It is a game of "Fantasy Football", loosely based on the rules of American Football, with some elements of rugby. Players field teams of Humans, Orcs, Elves, Dwarves, etc. and roll dice to decide the outcome of passes, tackles, and dodges.

In its initial inception, the game engine was closely based on that for Warhammer Fantasy Battle, and the background was consistent with the established Warhammer setting. However, the rules tended to bog the game down in a series of mid-pitch fights and the 1994 re-release of the game reinvented the rules to produce a more free-flowing game, as well as starting to take the game in a different, lighter tonal direction: in an alternate Warhammer world, warring armies found that their battlefield hid an ancient temple to the god Nuffle, whose worshippers in the land of Amorica practiced a brutal but highly entertaining combat ritual called Football. The troops decided to give it a try, and soon they developed their own version of Nuffle's Amorican Football.

Each team moves one player at a time, and if any player fails an action, then a turnover is called, and their entire team's turn is ended — this means that coaches quickly learn to prioritise actions and get very good at working out the best sequence of events to affect dice multipliers. That said, once a player is moved, the previous acting player will be inactive for the rest of the turn, forcing coaches to take risk quite frequently. This nature of the game is lampshaded by the named-in-the-fluff Random Number God, Great God of Dice "Nuffle" (a pun on the NFL), as entire games can turn on a single failed dice-roll. Experienced coaches sometimes refer to a spectacularly unlikely yet gravely devastating failed roll as being "Nuffled".

League play is encouraged, with players earning "star player points" for successful actions, which can lead to advances after the game at certain levels. Most commonly, players acquire extra skills, but can also end up with stat increases or, in the case of Chaos and Skaven players, mutations. Fans also come and go with the success of a team, and some dice-rolls during a game can be affected by how many fans have turned up (not to mention affecting the gate takings, and therefore the winnings generated). A handicap system ensures that weaker teams are given advantages to "even the odds" a little — this has been overhauled in the Living Rule Book and now includes temporary hire of Star Players, the ability to Bribe The Ref, numerous different Random Event/Special Item cards, and the like.

Originally released in 1986, Blood Bowl proved highly popular and went through a number of editions until it was discontinued, along with the rest of the Specialist Games range, in the early 2000’s. In November 2015, it was announced that the Specialist Games division was to be resurrected, with Blood Bowl being the first game released (on 25th November 2016) due to its continued popularity. A 6th Edition, titled Blood Bowl: Second Season Edition, was released in November 2020 and saw the rules being revamped and streamlined far more than in previous editions.

There was a comic adaptation released by BOOM! Studios in 2008, and a four volume series of novels by Matt Forbeck following the career of Dunk Hoffnung, Quarterback of the Blood Bay Hackers. There also exists an old, 1990s DOS-age game, rudimentary as far as graphics go, but highly entertaining due to multiplayer requiring only one computer. A second video game adaptation

Compare Mutant Football League, a video game that also focuses on a version of American Football with fantastical creatures.

The game and setting provide examples of the following tropes: