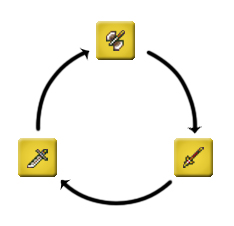 Not shown above: Frederick.

A common way of balancing play in Video Games is to classify units, attacks, and skills into several distinct classes, with each class having a clear advantage and disadvantage over other classes; in other words, the classes interact with each other like a game of Rock–Paper–Scissors. This helps encourage different playstyles by making the effectiveness of a given class slightly context-specific, and encouraging the player to utilize a variety of classes, rather than relying on the single strongest one.

For example, in strategy games:

Or in fighting games, beat-em-ups, and hack-n-slashers:

Or in Fighter, Mage, Thief games:

It is important to note that, sometimes, Tactical Rock-Paper-Scissors can be applied separately to an individual unit's offensive and defensive potential, which makes the Meta Game more complicated because the relationships are twofold. For example, tanks may have an advantage against infantry in general, but equipping said infantry units with anti-tank rocketry can level the playing field by creating a Mutual Disadvantage, where both units get an attack boost against each other (especially if the quicker infantry gets to shoot first). Likewise, tanks armed with anti-tank cannons or rocketry won't necessarily have their usual advantage against infantry as would tanks armed with machineguns and flamethrowers, and machinegun-toting tanks will also be at a disadvantage against other tanks with cannons or rockets.

In Strategy games specifically, Tactical Rock-Paper-Scissors provides an easy discouragement to the Zerg Rush, as a player building a massive swarm of identical, low-cost, and moderately-powerful units (hoping to wipe out enemy forces with sheer numbers alone) may suddenly find themselves annihilated by a small number of units exploiting their army's common vulnerability.

To a limited extent, this can be Truth in Television; there are plenty of examples of, say, medieval heavy cavalry getting skewered by pikemen, who would in turn be meat on the table for a bunch of men with crossbows, who would themselves be easily trampled by said cavalry before they could load their next shot. But the rock-paper-scissors relationship is often much more explicit, and much purer, in games.

Crippling Overspecialisation can sometimes be used to enforce this relation. Related to Situational Damage Attack in that some kind of attack may be more effective to enemies with a certain inferior attribute.

Sayaka explains the three categories most keijo players fall into. Pay attention and you'll see which has a type advantage against which.

Sayaka explains the three categories most keijo players fall into. Pay attention and you'll see which has a type advantage against which.