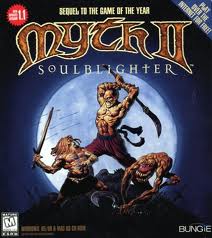 "In a time long past, the armies of the Dark came again into the lands of men. Their leaders became known as The Fallen Lords, and their terrible sorcery was without equal in the west. In thirty years, they reduced the civilized nations to carrion and ash, until the free city of Madrigal alone defied them. An army gathered there, and a desperate battle was joined against the Fallen. Heroes were born in the fire and bloodshed of the wars which followed, and their names and deeds will never be forgotten."
-Opening Crawl
Advertisement:

Myth: The Fallen Lords (1997) and Myth II: Soulblighter (1998) are a pair of classic Real Time Tactics games for PC and Mac produced by Bungie, the studio now famous for the Halo series, which contains at least one Shout-Out to them.

Heavily inspired by The Black Company novels and battle scenes from Braveheart, the games tell the story of an epic war between the living and The Undead, led by the eponymous Fallen Lords. They represent one of the first attempts to create a strategy game with no base building, instead giving each side a fixed number of units per level. What also sets this game apart from many others is its highly realistic and revolutionary for its time physics engine. Almost everything is potentially a projectile and everything is affected by its surroundings. This creates a certain unpredictability on the battlefield and can lead to horrible/funny outcomes.

A prequel, Myth III: The Wolf Age (2001), was produced by Gathering of Developers and developed by MumboJumbo. It was rushed through development and released with no play testing, resulting in a buggy game, later made more playable with fan-made patches.

The series boasted of a vibrant modding community that lasted well into the next decade and beyond. This included entire, full-length fan-made campaigns with new factions. Some of these rivaled the original in quality and a few were even included in the Total Codex re-release.

Not to be confused with the book series of the same name by Robert Asprin, or Myth, the co-op tabletop game from MERC Miniatures.

The Myth series provides examples of: