Video Game / The Mystery of the Druids 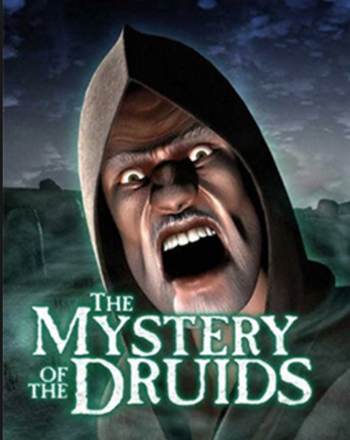 The face that launched a thousand memes!
"HALLIGAN! Where are my scissors?!"
— Lowry, at the end of his rope regarding Halligan's propensity to pilfer his office supplies
Advertisement:

A series of brutal murders leaves Scotland Yard stumped. When Detective Brent Halligan gets assigned to the case, he bumbles his way through ordinary activities and eventually discovers the murders' link to a conspiracy by a neo-pagan cult. When he teams up with a second playable character, anthropology professor Melanie Turner, their investigation into the British Order of Druids takes them on a trip through time itself.

This 2001 PC game is largely remembered for its meme-worthy box art, but that hilarious image doesn't even begin to cover the bizarre plot and even more bizarre puzzles.