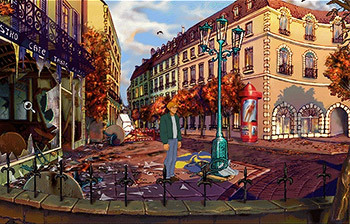 "Paris in the fall. The last months of the year, and the end of the millennium. The city holds many memories for me. Of cafés, of music, of love... and of death."
— Opening Monologue
Advertisement:

Broken Sword is an Point-and-Click Game series created by game designer Charles Cecil of Revolution Software. The game series revolves around the adventures of George Stobbart and Nico Collard in several fictitious stories based on history and mythology. The first two games in the series are controlled by a traditional point-and-click interface. The third and fourth installments are based on a 3D graphics engine, with the third game using a direct control mechanism. The fourth game returns to the standard point-and-click interface but within the 3D environment. A film, based on the first Broken Sword game, has been planned and is ready to be written.

Not to be confused with "The Sign of the Broken Sword".

Not related to the 1950s fantasy novel The Broken Sword.

Tropes related to individual games belong to their respective pages, and character tropes to the Characters Sheet.