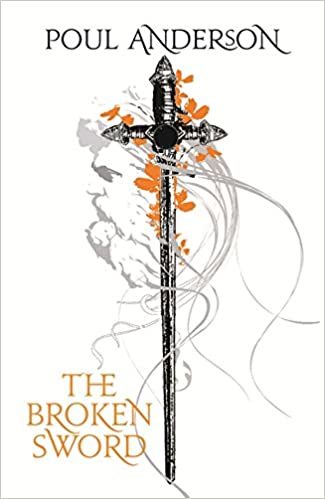 "I will succeed to your throne — but what good is that? What good is anything?"
— Valgard
Advertisement:

A fantasy novel written by Poul Anderson in 1954. It was issued in a revised edition by Ballantine Books as the twenty-fourth volume of their Ballantine Adult Fantasy series in January 1971. The original text was returned to print by Gollancz in 2002.

The book tells the story of Skafloc Half Elf (actually a human stolen by the elves), son of Orm the Strong. The story begins with the marriage of Orm the Strong and Aelfrida of the English. Orm kills a witch's family on the land, and later half-converts to Christianity, but quarrels with the local priest and sends him off the land. Meanwhile, an elf, Imric, seeks out the witch to capture the son of Orm, Valgard. In his place he leaves a changeling called Valgard. The real Valgard is taken away to elven lands and named Skafloc by the elves. He grows up among the fairies there. Later, he has a significant part in a war against the trolls.

The eponymous weapon, named Tyrfing in the 1971 revision, was given to Skafloc as his naming-gift by the Aesir. He later travels to the ends of the Earth to have it reforged by Bolverk, the Ice Giant.

The novel is set during The Viking Age and the story contains many references to Norse mythology, Celtic Mythology, and even a couple of mentions of more exotic (to Europeans) mythical creatures. It was influenced by the 1891 novel The Saga of Eric Brighteyes, by H. Rider Haggard.

Anderson wrote the book during the Cold War, and it does reflect on the story. For example, the Elf-Troll conflict is basically a proxy war between two great powers, the Aesir and the Jotuns; the latter two do not fight directly because that would lead to Ragnarok, the final battle in which most of the world would be destroyed. The parallel to the real-world threat of nuclear war is obvious. Even the titular sword may be an allusion to nuclear weapons; Skafloc contemplates throwing the sword into the sea, but realizes someone - probably much less moral than himself - would eventually find and use it.

A partial adaptation of the novel, done as a serialized black-and-white graphic novel, was adapted by fantasy writer Tom Reamy and illustrated by professional fantasy artist George Barr. This was published during the mid-to-late 1960s over several issues of Reamy's twice Hugo Award-nominated science fiction fanzine Trumpet; the adaptation was never completed, though there were revived plans underway to do so at the time of Reamy's untimely death in late 1977.

Michael Moorcock has mentioned that The Broken Sword greatly influenced some of his stories. For example, Elric of Melniboné's sword Stormbringer was clearly based on Tyrfing.

The novel has been praised for its well-written female characters (particularly when its age is taken into account). It is also notable for using a very similar body of mythological traditions to The Lord of the Rings, but weaving a very different story for it. The novel's general tone is quite dark and violent, and the characters often feel like pieces on a vast chessboard - just like the ancient Norse believed, You Can't Fight Fate very much applies here.

Not related to the Broken Sword video game series.