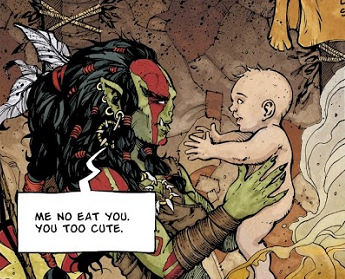 The child isn't so much raised by a pack of wolves or even natives (who while foreign or wild, genuinely love the child), but by their Always Chaotic Evil equivalents. Usually the orphan is from an orc raid, and their adopted parent(s) took them in out of either a rare display of paternal/maternal instinct, or to spite their human foes by twisting their children into cruel mockeries of themselves. Their life will probably consist of Training from Hell coupled with nihilistic life lessons, and focus on combat over social interaction. They will be taught Might Makes Right, that Asskicking Equals Authority, and to worship their God of Evil if they have one.

Of course, having not come from the Always Chaotic Evil stock, evil is not hereditary for them and is "all nurture", so they're prime Heel–Face Turn material. This can actually escalate if their foster parent(s) do love them, and the Orc Raised adult manages a community wide turn.

While Orc is part of the trope name, the group need not be inhuman fantasy creatures, any evil human or non-human group will do. (Also, since Our Orcs Are Different and some variants aren't Always Chaotic Evil, a child literally raised by orcs may not fit this trope...) However this trope and the Heel–Face Turn becomes much more pronounced if they're not human looking.