Literature / The Saga of Hervor and Heidrek 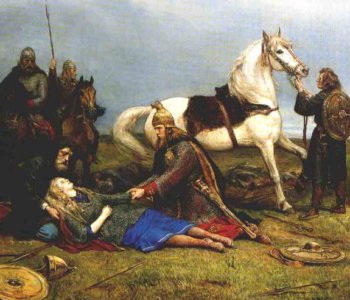 Now she sees where the grave-fire is burning on the edge of the island, and she goes up there and is not afraid, though all the mounds were in her path, and the dead standing outside.

The Saga of Hervor and Heidrek a.k.a. Hervor's Saga a.k.a. The Saga of King Heidrek the Wise is a 13th century legendary saga, forming a part of Norse Mythology.

On a hunting expedition, King Svafrlami of Russia captures two dwarfs and forces them to forge the ultimate sword for him in exchange for their life. The product is Tyrfing, a weapon so awesome it cuts stone and metal like butter, inevitably kills anything so much as scratched by it, and lets its wielder win every fight. But alas, in vengeance for their humiliation the dwarfs have built in a few nasty surprises: The blade is enchanted so that it must always kill a man when unsheathed, that Svafrlami will die by it, and that it will be the instrument of three acts of parricide.

It is believed the Saga of Hervor and Heidrek was originally composed as a frame story for several pieces of heroic poetry that are older than the saga and are included in the narrative verbatim. In the process, the author tied together several legends and legendary figures that, in all likelihood, had no link to each other before that, and thus created a generational saga about a turbulent family and their cursed heirloom.

The plot thus created is somewhat episodic and loosely connected, and subsequent writers have felt the need to tinker with the story. The greatest differences appear between the oldest (and shortest) variant (surviving in a single manuscript) and all the younger manuscripts which tell a rewritten and expanded plot: In fact, only the younger version relates the circumstances of Tyrfing's creation and introduces its threefold curse. No two manuscripts tell exactly the same story, and no manuscript is completely free of consistency snarls. Accordingly, translations (which are necessarily synthesized from a number of manuscripts) vary quite a bit, depending on the translator's choices.

On the plus side, the saga is highly valued for the poetry it preserves, and which provides some of its most memorable scenes: Among these are "The Waking of Angantyr", in which the shieldmaiden Hervor calls forth her father Angantyr from his gravemound to hand her over Tyrfing which was buried with him; "The Riddles of Gestumblindi" in which Hervor's son Heidrek plays a game of riddles with a disguised Odin; and "The Battle of Goths and Huns", which tells of a humungous succession war in the kingdom of the Goths, drawing on very old lore from a time when the Goths were still living north of the Black Sea.

(2005). A Cliffs Notes-esque version of the tale is included in the opening section of Scion: Ragnarok.