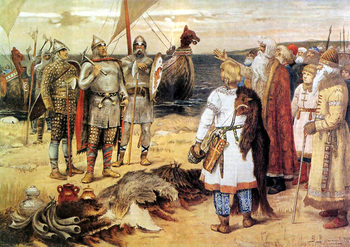 The Invitation of the Varangians by Viktor Vasnetsov.
Advertisement:

Kievan Rus, or Ruthenia. The ancestor state of Russia, Ukraine and Belarus. Its early history is Shrouded in Myth; the first reliable historical records are from the ninth century.

The term "Kievan Rus'" (or "Kyivan Rus'" going by Ukrainian ortography) was coined in the 19th century in Russian historiography to refer to its period of history when the centre was in Kyiv and ruling Rurik dynasty sat there. From translation of Rusian historiography the term entered the international historiography. During its actual existence in IX-XIII centuries the state was called by its people simply as "Rus'" or "land of Rus'", while in the rest of Europe it was known as "Russia" or "Ruthenia". Eventually, "Russia" stuck to indicate the north-eastern half (modern Russia), while "Ruthenia" stuck to indicate the south-western half (modern Ukraine and Belarus).

The theory best known by lay people (usually called "Normanist") says that Kievan Rus was founded by the Scandinavian prince note (At that time, Rusans used one title "Князь" or "Knyaz`", and "Великий" (the Great) "князь" meant the first among the equals. Initially this meant the seniormost of the Rurikid princes, but eventually began to be ascribed to the ruler of Kyiv, until Kyiv lost its importance (which actually happened even before the Mongol invasion). The titles were in active use to the end of Russian nobility in early 20th century Rurik and his Viking followers, who migrated south and conquered the backward, almost-tribal Eastern Slavs (ancestors of Russians, Ukrainians and Belarusians). The truth is really unknown, and is the grounds for very hot and politicized debate.note Whereas in Britain the Viking heritage was appropriated and celebrated, thanks to Norway and Denmark being quaint little remote countries in the north that posed no threat to the British after the Viking age, Sweden and Russia have been deadly enemies ever since the early middle ages to the early 19th century. Even today the relationship between the two countries is mostly formal and cool. He who can lay claim to the Rus would win a massive propaganda victory.note However, ironically, the most probable historical candidate for the role of legendary Rurik was actually a Dane. Scientific consensus is generally that the Vikings were at a similar level of development to the Slavs, and that their cultures were sufficiently similar for people and nobility to freely mix together. One of the Old Norse words for Ruthenia was "Gardariki" ("realm of [many] towns"), which suggests pre-Kievan Rus was already an urbanizing culture. note Although there's nothing stopping the possibility that these towns were built by Vikings too.

Another Norse term for Kievan Rus is Svitjod the Great or Svitjod the Cold. Svitjod is an old Norse name for Sweden. note Meaning literally "the Swedish people" as this was before the existence of kingdoms and national identities in the modern sense. Compare with when the Angles and Saxons began to be referred to as the "Angelcynn".

A theory that's gaining traction nowadays is that the petty princes of many Slavic and Finnic tribes that populated the territory were dissatisfied with the constant squabbles between them. And then among the Novgorodians (already a somewhat prosperous trade hub) a wish arose for an impartial arbiter from a respected noble house not invested in their struggle, who would settle their difference and observe their court cases, which resulted in the invitation of a notable but currently landless Danish king.

An official myth dating back to the Imperial era says the Slavs themselves invited the Norse to rule them. Needless to say, it is subject to the same debate, which is generally more about politics than history. Some say that knowing the attitudes and customs of The Dung Ages, this is highly unlikely. Others insist that it was actually pretty routine. Just don't try to bring it up in non-scientific circles. The first capital of Rurik's principality was the ancient Northern city of Ladoga (now called Old Ladoga), but soon moved to Novgorod (another Northern city, founded by the settlers from Ladoga; now called Veliky ("Great") Novgorod despite being smaller than the other Novgorod; the Norse called it Holmgard). His sons, however, took it south to Kyiv.

The original Kievan Rus was pagan, with the Viking-descended nobility worshiping the Norse gods and the common Slavs their own pantheon, which was somewhat similar, but distinct. There was also a significant and influential Christian minority, as well as Jewish and Muslim ones. Christians, however, were much better placed, as they generally were Christianized Vikings who served at the Eastern Roman court as mercenaries, and were often relatives of Russian nobility. In 988, Prince Vladimir I, who was dissatisfied with paganism, and wished to establish a state religion, converted Rus into Orthodox Christianity.

Allegedly, he organised a "casting": Catholics failed because of the fasting and general dourness, of the Muslims Vladimir is said to have liked most of the doctrine but declared that "Drinking is the joy of the Russes. We cannot exist without that pleasure", of the Jews Vladimir concluded their own God must dislike them if they're dispersed like that, while the Orthodox Romans were careful to approach Vladimir with all kinds of bling and little of the rules. This is a myth, however. In fact, Vladimir was heavily influenced by Christianity from the start, and his grandmother, Princess Olga, was a Christian, baptized at the Byzantine Roman court. Many pagan customs, though, persisted into the Tsarist era and even to this day, after being coopted into the Christian ritual.

Early Kievan Rus was a united monarchy, though with big family feuds, exacerbated by the Slavic succession laws, where the brother held precedence over the son. This quickly led to a bloody free-for-all, and in the 12th century a feudal patchwork kicked in. That made the blanket term "Kievan Rus" obsolete: There were also the Vladimir Rus, the Novgorod Rus, later the Moscow Rus and many smaller principalities, although initially the Kievan throne was notionally their suzerain, and the ruler of Kyiv held the title of Grand Prince. This made Rus very vulnerable to outside threats, and in the mid-13th century it was overrun and ruled briefly by the Mongol Horde. For some reason, this period of history is referred to as 'the Tatar Yoke', probably because the western part of the Mongol Horde, the most represented in its new vassal lands, was mostly Tatar.

The Mongols left most of the political system intact, but now the Grand Prince had to be formally recognized as such by his Mongol lieges, who chose the most obedient ones. The Novgorod Rus was spared the Mongol invasion by being too far north, and its princes and council being such effective rulers (Novgorod was a republic, its prince being only the hired military leader, who could be deposed by the parliament and the city council), but had to deal with other enemies, such as Swedes and The Teutonic Knights.

The question of who are now the "true heirs" of the Kievan Rus is often a matter of disagreement between Eastern Slavs, with Russians saying that Moscow's reunification of the northern principalities and Kyiv's depopulation by the Tatars and later subjugation by Lithuania (and Novgorod, a distinctly Russian city, being the first capital of Rurik's princedom) make it clear which city inherited the title of the capital of the Rus, while Ukrainians see the Galicia–Volhynia as the heir to original Rus, and claim that Kyiv and the southern principalities stayed as the core of Ruthenian culture, unlike the colonial northern principalities, the people of which were intermingled with Ugro-Finns and Tatars (according to genetic

, Russians, Ukrainians, and Poles are very close, and the Russian genetic pool shows no Turkish or Mongol impact - most likely for the reason that the Tatar-Mongols rarely had direct contact with Russians, and Russians saw them as invaders with inherently alien culture). Belarusian principalities mostly stayed autonomous from Rus and, being united with Aukštaitija, formed the Grand Duchy of Lithuania, which would later unite most of the Ruthenian territories, except for Novgorod and North-Eastern colonies that would become a basis for the future Russia. But since Russians pack the greatest punch of the three most of the time, the Russian-Ruthenian connection is the most well known. This question is complicated even more by the fact that a people called Ruthenians (or Rusyns, or Ruthens) do exist now; they are relatives of Ukrainians living in Transcarpathia (and elsewhere; Andy Warhol — birth name Andriy Varhola — was Ruthenian American).

If we can return to the debate about the origin of the Rus, the clear majority of western historians believe in the Normanist theory. And truthfully, primary sources such as the annals of St.Bertin

note Literally spells it out that the Rus were Swedes. Seriously. It says "eos gentis esse Sueonum" which means "These men are Swedes" or "among them are the Swedes" and Ahmad ibn Rustah

note clearly states that the Rus and the Slavs are two completely different peoples, the latter being subservient to the former. seems to support this theory. Since we at TV Tropes are not at liberty to discuss these things too vividly, the best thing you can do is go to the library, read up and decide for yourself. Omeljan Pritsak

have written at length about the theory, the former against it and the latter in favor of it.

Notable princes of the period include: