Literature / The Chronicle of Duke Erik 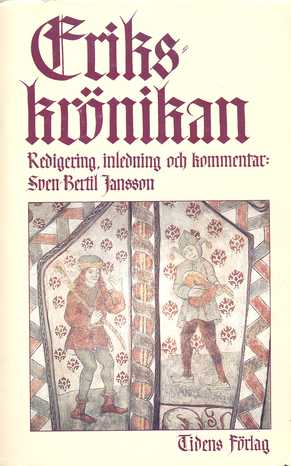 The Chronicle Of Duke Erik (Swedish: "Erikskrönikan") is a medieval Swedish Chronicle written sometime in the early to mid 14th century (but most likely based on much earlier sources) by an unknown author. It is the oldest written chronicle in which aims to provide an overview of Swedish politics, from about 1229 to 1319. It is a work of classic chivalric poetry, written in rhyme by an author who was very familliar with old and contemporary European poetry in the same style, for example the French "Chanson de geste".

Although the chronicle begins under the rule of Eric the Lisp And Lame in the 1220's, it's main focus is the period between 1250 and 1319 ending with the ascension of Magnus "The Caresser" Eriksson in 1319. Between that the Chronicle also touches upon the life of the father of the Swedish state, Birger Jarl note Or at least a beta version of it. The mileage varies between modern historians wether it is him or Gustav Vasa who should be given the honour., The Folkunge note Rebellious Noblemen from Uppland who oppossed the expansion of royal power Rebellion, The so called "Brothers War" between the sons of Magnus Ladulås, The founding of Stockholm and the wars with Russia (Novgorod) among other things.

Like many Medieval sources The Chronicle Of Duke Erik has come under criticism from modern historians. In this case it is said by some that the chronicle is simply propaganda in favour of it's eponymous character: Duke Erik Magnusson of Södermanland, in order to portray his clan (Bjälbo) as upstanding noblemen, perfect Knights and all-around badass cool dudes. Still most of the chronicle is held to be historically correct and a very important source to Swedens medieval history.

The chronicle has so far never been translated into modern Swedish. A "annotated" version was released in the 1990's wich had a glossary for some of the more difficult phrases but other than that kept the medieval spelling intact. An English translation was released in 2012.

The chronicle provides examples of: