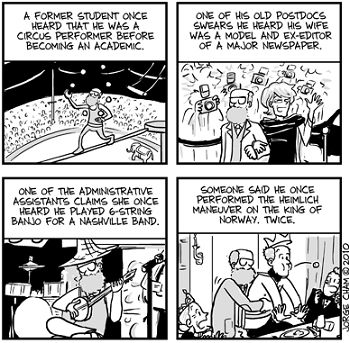 Borlik: You know, I heard he destroyed a Peacekeeper Gammak Base, murdered an entire Nebari battalion, even laid waste to a Shadow Depository. The guy was a devil: he raped and pillaged, he popped eyeballs—
Crichton: Whoa-whoa! Where do they get these stories? Let's set the facts straight. First off, there was no raping, very little pillaging, and Frau Blucher popped all the eyeballs.
— Farscape, "Suns And Lovers"

You've heard the stories. There's someone out there, a Living Legend, mysterious and untouchable. Rumors and hearsay seem to surround their every word and deed. And not just the normal sort either, but the utterly ridiculous kind. Like that he's thirty feet tall and shoots lightning bolts out of his arse. Sure, there's a kernel of truth in there somewhere, but who even knows where or what it might be with all the stories surrounding the truth. This all may set up a moment of disappointment when the truth gets revealed.

Commonly The Reveal shows the Miles Gloriosus, Fake Ultimate Hero, or Feet of Clay. On the other hand, it's always wise to remember that the kernel of truth can be pretty dangerous; compare Badass on Paper.

Frequently part of a No Hero to His Valet, No Badass to His Valet, or Warts and All plot. Also, all three plots tend to absolve the idealized character of any responsibility for the misconceptions of anyone else, as he can hardly prevent rumors and stories from arising.

When a parent is Shrouded In Myth, the child's reaction is often Tell Me About My Father. When people don't want him to Turn Out Like His Father, they tend generally to add only the allure of Forbidden Fruit to him. (And often enough result in Anti-Climactic Parent.) Not to be confused with The Fog of Ages, which is something else entirely.

Objects, places, pieces of technology, and magic spells can also be Shrouded in Myth, but the effect is less dramatic. Does explain why the Penultimate Weapon can beat out the Ultimate one.

When this happens in the fandom rather than in-universe, it's a Memetic Badass.

Contrast King in the Mountain, Malicious Slander. Anything from The Time of Myths is invariably Shrouded in Myth. Compare Legend Fades to Myth.