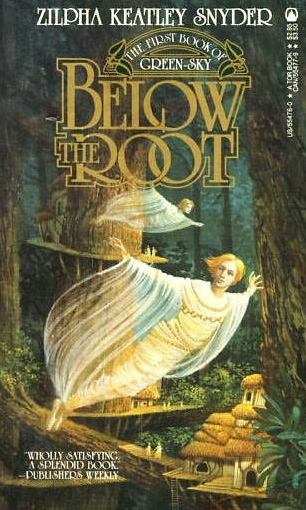 This young-adult trilogy (Below the Root, And All Between, and Until the Celebration) was written by Zilpha Keatley Snyder. It spawned a video-game Sequel in Another Medium called Below the Root, which is considered canon.

After the End, a group of scientists and a shipload of war orphans left Earth That Was and travelled to a new planet. Generations later, their descendants have split into two separate and distinct cultures. The Kindar live in a Tree Top Town, have Psychic Powers at an early age (which are fading), and have no knowledge of violence whatsoever, and the best they can express of unhappy feelings is "unjoyful."

Historically, some Kindar and a few of the scientist leaders — including the ones who created the entire complex structure of Kindar society — believed the kids should be brought up so that when they're old enough to handle it, they would be told about their history and what violence is, so that they will want to avoid it. After a debate, these mavericks were trapped Beneath the Earth, and became the first Erdlings, while the leader of the dissident scientists suddenly died (hey, nothing suspicious about that, right?). Today, however, the Kindar are taught that the underground caverns are inhabited by Pash-shannote say it fast, accent on first syllable: monsters who steal and enslave (or eat) Kindar, especially orchard workers and children who fall out of the trees. The only ones who know the history are the Ol-zhaan — leaders, counselors, healers, judges and priests — who are believed to have infinitely superior wisdom and Spirit power.

Protagonist Raamo is a young Kindar who is elevated to the ranks of this elite priesthood, keepers of the ancient secrets. A fellow Ol-zhaan confides his accidental discovery of an inner circle, the ones responsible for exiling the Erdlings. Things get shaken up even more when an Erdling named Teera escapes and is discovered by Raamo and his friend, and becomes BFFs with Raamo's Ill Girl sister Pomma, subsequently triggering massive upheaval in both societies.

Alternative Title(s): Below The Root