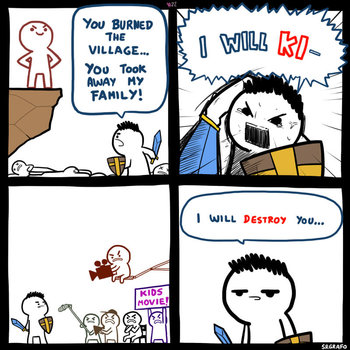 [talking to Ash about a very aged and weak Stoutland]
"Stoutland isn't hurt, and it doesn't have any serious illness. It's just that Stout—" [door slams shut before she can finish her sentence]
— Nurse Joy, Pokémon the Series: Sun & Moon, "One Journey Ends, Another Begins..."
Advertisement:

Certain concepts considered "too sensitive" are only ever referred to by euphemisms.

The most common example is euphemisms for death in children's shows, even in cases where a character is killed and they are thusly rendered dead, the script will never use those two words. Almost always, the writers don't even get very creative with poetic descriptions, and will apply basic synonyms of "destroyed" to living things that we usually associate with inanimate objects, or have the characters unable to finish their sentences. ("Is he...?") Hell is also constantly neutered; when the plot absolutely needs something similar, they often resort to calling them "Nether-something" (of course, except for the Netherlands, aka Holland) or even "Another Dimension."

Another frequent method is to hastily add dialogue that suggests the people we've just indirectly seen killed didn't really die, e.g. showing a city being destroyed, and having a character note: "Good thing everyone in that city evacuated at the last minute!"

For one reason or another, children's shows also shy away from using "God." Whenever religion comes into play, it is generally replaced with something along the lines of "the big guy." Similarly to the die and kill examples below, if a situation is serious enough in cartoons aimed at slightly older children, God's name may be used as a suitably f-bomb level expression of shock or horror. If a character is actually discussing religion in a cartoon, God's name is used with a similar level of gravitas, but may be much more frequent, or used in a genuinely cheerful context.

It should be noted that one likely reason for this trope is because the writers and producers seem to think that their target demographic is too immature to grasp the concept of somebody dying, or alternatively will be horribly traumatised - rationales that in fact cancel each other out. Some people reason that the belief that since children may not be able to understand death they should be subjected to a villain who plans to destroy them, insults and desensitizes everybody. Another point is that if death is too sensitive for children of a certain age, they probably ought not to be watching a show or movie in which people, you know, die. If you as a writer are aiming specifically at children that age, maybe write stories in which no one dies or is in danger of dying. This trope could be seen as the writers trying to have it both ways.

One major exception is the verboseness of a Big Bad usually makes the trope work for him.

Occasionally, shows that usually follow this rule may break it, usually to highlight the seriousness of the situation shown or discussed. Sometimes, this is used to prevent imitatable acts, in this case, a character, or a character's parent, will remark on the dangerousness of a situation a character has (just barely) extricated themselves from, often saying something like, "I'll never do that again! I could have been killed!"

Also note that just because a character didn't mention any variation of "dead," "die" or "death," that doesn't automatically make it an example of this trope. Saying something like "It's time to smash you into pieces!" isn't this trope. Saying "It's time to defeat you!" is, because "defeat" is directly used in replacement of "kill." "Smash you into pieces" is used for specific wording emphasis. This is not a trope for every single examples where a villain uses wording to do with something other than death when confronting the hero, or vice-versa.

It should be noted also, that this isn't for examples in which a show has a character being "taken away" instead of killed. If the character really was taken away, then it's not an example of this trope. If the character was obviously killed but instead they refer to their death with "they were taken away", or if a certain version of something changes a character's death scene so they never died, then it is an example. This isn't for complaining about scenes where a character was "killed off the show" in a way other than death, which is simply Put on a Bus.

Please note as well, that this also isn't for complaining about examples where a disaster of some kind resulted in no deaths. If said disaster is something where it's insane to think that no one got injured at all, then it's an example. If it's a disaster in which no one getting killed isn't an unreasonable occurrence, then it is not.

This is sometimes Played for Laughs when what seems to be a euphemism is in fact a Literal Metaphor — "Grandma's gone to a better place; I hope she enjoys her Caribbean cruise" — causing people to mistakenly believe the person died; in those cases they're No Longer with Us.

Usually a form of Executive Meddling. Compare with: Gosh Dang It to Heck!, Unusual Euphemism, Frothy Mugs of Water, The Disease That Shall Not Be Named, Conveniently Empty Building and No Endor Holocaust. Coming closer and closer to becoming a Discredited Trope. When used as an actual in-world element, it's Double Speak or a Deadly Euphemism. Contrast Try Not to Die. Often, but not always, foisted on the Badbutt, who will instead use words like "toast" or "beat." If they're allowed to say "kill" and "die" but aren't allowed to actually kill characters, then it's Nobody Can Die. If you're looking for a character who never says die — who never quits and won't back down even in the face of death — then it's Determinator. If it involves outright Lies to Children about what really happened to Tropey, that's Dog Got Sent to a Farm.

Be sure to bear in mind that the above does not apply to the Western culture as a whole as not all of us really live in America or any other Anglo-Saxon country for that matter. In most of Europe, for instance, creators usually don't shy away from using words like "die" or "kill" (or those with religious connotations) as long as their shows are aimed at least at school-age kids.

But please note as well that just because 'defeated' or 'eliminated' is used in place of "killed", or "they were...taken from us..." is used instead of "they were...killed", it doesn't make it an example of this trope either. Sometimes alternatives are used because they sound flashier, have a better impact, or because the enemies really do just get "defeated" and fade away. After all, the creators often don't want their characters coming off as cold-blooded killers. This is for examples in which it is obviously censored due to the fact that they don't want to mention death. Any other form of replacing death with anything else does NOT count as this trope.

Oh, and since it's a death trope, SPOILERS AHEAD!

If you're looking for the album Never Say Die, go here.