Born in the Theatre 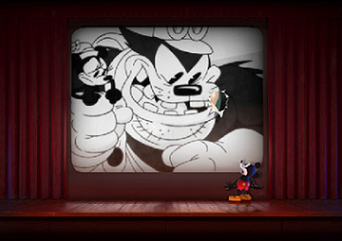 Prior to the advent of TV, cartoons were produced for theatrical release only. They were either run as shorts before the showing of the feature film, or shown on a weekend matinee.

As a result, there are a few No Fourth Wall jokes that appear in 1930s and 1940s vintage cartoons that would make absolutely no sense to a modern audience watching it on television or unaware of the history.

Nowadays, you'll mainly see them in Looney Tunes and Classic Disney Shorts, where they have been used for decades and remain through a sort of Grandfather Clause.

Alternative Title(s): Born In The Theater