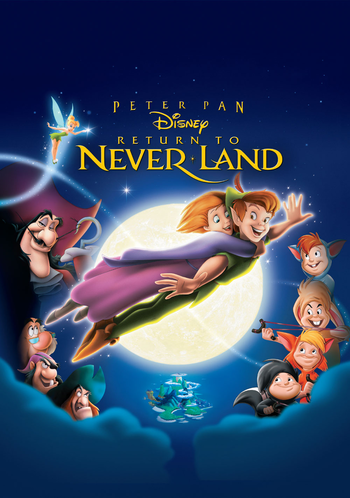 Return to Never Land (also known as Peter Pan 2 or Peter Pan 2: Return to Never Land') is a 2002 American animated fantasy comedy-drama film produced by DisneyToon Studios in Sydney, Australia and released by Walt Disney Pictures. The film is a sequel to the 1953 film Peter Pan, and one of DisneyToon's few sequels to premiere in theaters (as opposed to going Direct to Video).

The movie takes place mainly during World War II, after the now-grown-up Wendy has married and become the mother of two children, Jane and Danny. Jane refuses to believe her mother's stories about Peter Pan and Never Land, choosing to instead focus on surviving the Luftwaffe's nightly bombing raids, but gets kidnapped by Captain Hook one night after being mistaken for her mother. After Peter Pan saves her, he tries to help her return to London from Never Land, by teaching her how to fly. When Jane's difficulty in believing in magic and fairies keeps her grounded - and also causes Tinker Bell's light to start to fade - Peter and the Lost Boys try to help Jane realize the power of "faith, trust, and pixie dust" by training her to become the first "Lost Girl". However, Captain Hook also ropes her into his schemes to capture Peter Pan and the Lost Boys, and claim some treasure.