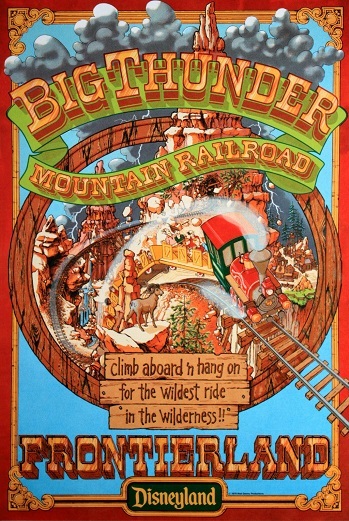 "If any of you folks is wearing hats and glasses, best remove them! 'Cuz this here's the wildest ride in the WILDERNESS!"
Advertisement:

Big Thunder Mountain Railroad is a mine train roller coaster at the Disney Theme Parks. Located in the Frontierland part of the parks, the coaster is themed around a mine train ride through a cursed mountain.

The basic storyline of the coaster is that the mountain was once a huge source of gold during the Gold Rush, making many boom towns form up around it as a result, along with the creation of the Big Thunder Mining Company. The amount of gold in the mountain ended up being so huge that a mine train system was built through it to transport the miners' findings. Unknown to them, the mountain was actually a sacred ground used by several Indian tribes, where they worshiped a spirit that resides in the mountain. That very spirit was displeased with all of the people defiling the mountain, and thus sent down a natural disaster on the land that effectively ended the mining business and rendered the boom towns mostly abandoned. Along with that, the spirit also possessed the mine systems, giving all of the trains a mind of their own. From there, the story tends to vary as to what happens next.

The history of the coaster began in the late 1970s with Disneyland and Walt Disney World desperately trying to add in more roller coasters to their parks to attract in the thrill-seeker demographics, part of a building spree that also saw Space Mountains open at both parks. Famous Imagineer Tony Baxter proposed building a more simplified version of the mine train coaster that was to be built at the scrapped Western River Expedition attraction in Walt Disney World. The idea was swiftly decided upon, and on September 7, 1979, the first Big Thunder Mountain Railroad opened to the public. 14 months later, on November 15, 1980, the Magic Kingdom opened a mirror image of the California ride. It would then go on to be cloned again to Tokyo Disneyland in 1987 and Disneyland Paris, opening with the park on April 12, 1992.

In 2015, Marvel Comics published a limited series based on the ride, as part of the Disney Kingdoms imprint, written by Dennis Hopeless.

If any of you folks are wearin' hats or glasses, best remove 'em, 'CAUSE THESE HERE'S THE WILDEST TROPES IN THE WILDERNESS!