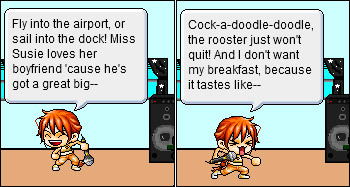 Para: We are villains who like to rhyme...
Dox: In fact, we do it all the time.
Para: You may think it's rather crass...
Dox: But you can stick your cards right up your nose.
Para: ...You were supposed to say "ass", brother. I thought we rehearsed this.
— Yu-Gi-Oh! The Abridged Series
Advertisement:

So... you're listening to a song, (maybe deciding to sing along) or are on one of those crazy planets (with a population of Janets?) where everyone speaks in verse (without needing to rehearse). A rhyming couplet is set up, (and you watch your hopes get up) but rather than using a rhyme, (being accomplished on a dime) the speaker takes it in a different, non-euphonic direction, (but maybe not in need of course correction) either by speaking a different word, (could be one you've never heard) having it bleeped out, (lest you be creeped out) or cutting off an offending section. (Such as the outcome of a voting.)

This is most often used for comedy: typically, the rhyme set up and subverted was clearly supposed to be a profanity. (If the replacement word begins the same way as the averted word, this amounts to a deliberate Curse Cut Short.) It's one of the myriad gimmicks used for Getting Crap Past the Radar, and when used this way is known as a "Miss Susie". after one of the most famous examples. Sometimes in this case the cut-off word will appear in a different context as a Midword Rhyme ("The steamboat went to hell/-o operator."). Doing this is the only way to get the worse Bawdy Songs on American network television — though of course the trope is much older than that: it's used in an Elizabethan broadside ballad about seducing a maiden, thus making it at least Older Than Steam. That said, the trope can be used for comedy without implying profanity, just by making the way the rhyme is going totally obvious and then not going there.

Known as a mind rhyme

according to The Other Wiki.

A subtrope of Last-Second Word Swap. Compare with Painful Rhyme, Rhyming with Itself and Midword Rhyme. Not to be confused with Lame Rhyme Dodge. See also Twisted Echo Cut.

The Chalkeaters' "Count to Three", which teases Gabe Newell and Valve's inability to make a third numbered installment to any of their franchises, reimagines the announcement for Half-Life Alyx.

The Chalkeaters' "Count to Three", which teases Gabe Newell and Valve's inability to make a third numbered installment to any of their franchises, reimagines the announcement for Half-Life Alyx.