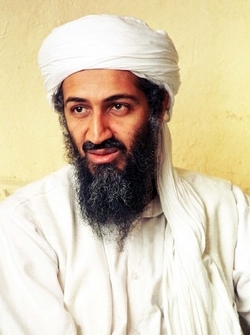 Osama bin Laden was a Saudi Arabian noble and the leader of the international Sunni Muslim terrorist organization al Qaeda. He was responsible for both major terrorist attacks on the World Trade Center in New York, as well as the bombing of the USS Cole.

He was eventually located in a fortified compound in Pakistan. He was killed at the compound on May 1, 2011 during a U.S. Special Forces operation, closing a chapter in the war on terrorism.

For more information on global terrorism's overal influence on media, see The War on Terror.