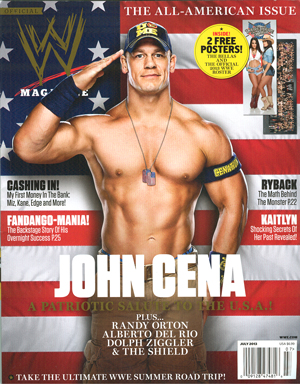 The champ is here! AND HIS NAME IS JOHN CENA!

Jonathan Felix Anthony Cena Jr. (born April 23, 1977) is an American Professional Wrestler currently working for the WWE. With a career spanning 20 years, he rose through the pits of the midcard to become a legitimate success story, and is widely regarded as one of the biggest, if not the biggest superstar to ever grace WWE, and the 21st century equivalent of Hulk Hogan.

Before he made his name in WWE, he wrestled in Ultimate Pro Wrestling (UPW) and Ohio Valley Wrestling (OVW) with a gimmick based around his old career as a bodybuilder: "The Prototype" or "Mr. P". He made his official WWE debut on June 27, 2002 after accepting an open challenge from Kurt Angle. After impressing Stephanie McMahon with his freestyle rapping on the WWE tour bus, she convinced the higher-ups to give him a push. Batista was the one tapped to be the new Hogan, but Cena got over with his rap gimmick which was essentially a last-ditch ploy before they released him: "The Doctor of Thuganomics." He would go on to beat John "Bradshaw" Layfield at WrestleMania 21, where he would win his first WWE Championship and first world title overall. In 2006, he was promoted to an All-American Face with the release of The Marine.

Unusual for a career babyface, Cena maintained his top spot for an unprecedented 10 years, through no fault of his own: Jeff Hardy's merchandise outsold Cena's for three months straight, but WWE had to dump him after the Junk Squad raided his house. CM Punk surpassed him in late 2011 and early 2012, but had to turn heel and drop the title to The Rock, somehow never made it back into the main event picture even after turning face again, and finally quit the night after Royal Rumble 2014. After fighting against it, the company finally gave Daniel Bryan a push... just in time for his forced retirement. Three contenders for the crown, and WWE has been burned three times. As a consequence, Cena is one of the most polarizing Superstars in WWE history, as older fans have grown tired of him always winning. But he has also raised a child army of new fans, triggering a weekly shouting war of "LET'S GO CENA" and "CENA SUCKS".

Now in his forties, he is starting to look his age, but Cena matches still pull bigger audiences than non-Cena shows, and he sells five times more merchandise than other stars (cunningly, WWE has begun selling "CENA SUCKS" t-shirts to double their profits). He will continue to plod along with his wholesome, kid-friendly hero and—as long as he can still go—the company will always bet on a record like Cena’s.

It goes without saying that the Cenation holds claim to a lot of titles. To put into context: Ric Flair had a career that spanned over thirty years; in that span of time, he won 16 world titles (or a few more depending on who you're asking). By comparison, Cena has matched Flair's record, yet has only been active for about a third of Flair's career. He's also a one time Money in the Bank winner, in which he became known as the first person to unsuccessfully cash in. (Through no fault of his own, however. The Big Show interfered in the match, so Cena won the match, but not the title. Coincidentally, Cena would later be responsible for causing Damien Sandow and Baron Corbin to lose the match after cashing in, another first.)

Additionally, he has also dabbled in Rap music (including releasing a full album, You Can't See Me) and has become something of an action/comedy film star in his own right. For more on his non-wrestling ventures, see his creator page.

open/close all folders
0-B
C-E
F-H
I-K
L-N
O-Q
R-T
U-Y
IF THIS PAGE GETS EDITED, WE RIOT
Feedback

Example of:
Five Moves of Doom