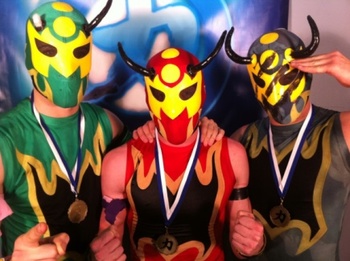 The Colony are a Professional Wrestling Tag Team/Power Stable best known for their years in CHIKARA. They debuted as Team Colony (Fire Ant and Soldier Ant) in a loss to Lancelot (Lance Steel and Lance Steel) at CHIKARA Tag World Grand Prix 2006 Night II on February 25, 2006. Worker Ant (I) joined late that year, leading to them being officially named The Colony. In 2008, Fire defeated Vin Gerard to win the CHIKARA Young Lions Cup

with Joey Spades and the WiF! (Wrestling Is Fun!) Banana Title

, that is a title represented by an actual banana. Silver Ant held the Forza Lucha Cup

. Fire Ant is the WrestleJam Champion

You can find the basics at Wikipedia