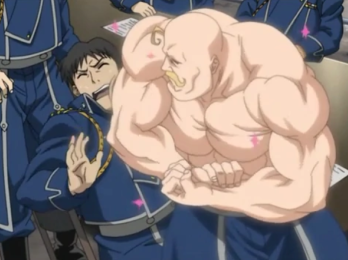 Armstrong's physique has been passed down the Armstrong line for generations! Would you doubt a man with muscles this large? FEEL!note Bishie Sparkle included.
LaBarbara: You can't argue with those luscious pecs!
Hermes: No I can't. But I can ask him to stop wiggling them in my face!
Barbados Slim: I'm not wigglin' dem. Dey do dat by demselves.
— Futurama, "Bender's Big Score"
Advertisement:

A Spear Counterpart to Gainaxing, where a male character's pectoral muscles jiggle and bounce, except that they flex them to make it happen. However, generally it is used not so much for Fanservice as it is used as an often comedic demonstration of "manliness". Other names for it are the "Pec Bounce", the "Pec Dance" (usually this name is used if people flex their pecs in time to music), and the "Pec Pop". A character with a Bodybuilding background would probably do this while hitting some variation of either a "side chest" or a "most muscular" pose (Armstrong pictured hitting the MM), since those are the ones which most emphasize the pecs.

Another variant is the "Ab Wave", where a character with a well defined six pack will flex their stomach muscles like a wave. Generally, this isn't so much saying "look how strong I am" as it is "aren't I sexy?"

For cases of Pec Flex when the flexer has less-than-impressive pecs, see Flexing Those Non-Biceps.

Super Macho Man flexes his pecs and glutes for the audience.

Super Macho Man flexes his pecs and glutes for the audience.