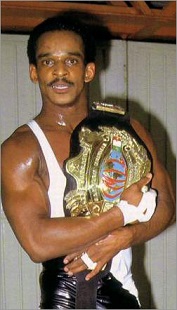 "Another of my hardcore opponents was Norman Smiley. Smiley was a great guy who got the gimmick of "Screamin'" Norman from Russo. What a lot of guys didn’t realize was that Norman was a whole lot tougher than they thought he was. He worked for Japan’s UWFI, which was a group working in a shoot style, a brutal punishing way to work. I knew Smiley could go, although he never felt like he had to prove how tough he was. I was also glad I was never someone he needed to prove it to."
— Terry Funk

Norman Anthony Smiley (born 28 February 1965) is a retired British Professional Wrestler and trainer best known for his time in WCW from the late 1990s until the promotion's demise in 2001. He started his career in Florida in 1985 after training at the Malenko family's school. He made his PPV debut teaming with Chris Adams as Team United Kingdom in a losing effort against Team Mexico (Konnan and Rey Misterio Sr.) in the Pat O'Connor Memorial Tag Team Tournament at NWA Starrcade 90. He first made his name in Mexico as Black Magic. He made a few appearances for ECW in 1995, teaming with Mikey Whipwreck in losing efforts against Chris Benoit and Dean Malenko. He spent years Jobbing in WCW before he finally caught on with the audience competing in the hardcore division. He would hold the WCW Hardcore Title

twice, with his gimmick being that he really didn't want to do hardcore matches and didn't want the title. After WCW died, he competed in a variety of promotions, including making some on-and-off appearances for TNA in between 2002 and 2007. He has also competed for AAA, MLW, Juggalo Championship Wrestling, WWE (some dark [non-televised] matches), Future Of Wrestling, Dragon Gate and several others in Mexico, the U.S. and Japan. He had an onscreen role as a lieutenant general manager and liaison to Steve Keirn in WWE's FCW developmental promotion, and also worked offscreen as a trainer. He now works full-time as a trainer for WWE's NXT developmental territory.