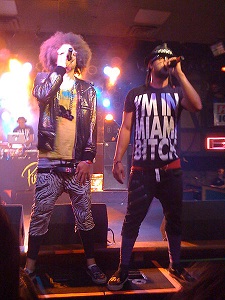 LMFAO was an electro pop group consisting of Redfoo and Skyblu (respectively Stefan Kendal Gordy and his 10-years-younger half-nephew Skyler Austen Gordy). The group was originally created in 2006, and named "Sexe Dude", but they changed it on advice from their grandmother.

In 2011 their single "Party Rock Anthem" hit the charts, peaking at number one. The group proved to be popular enough to get a quick cameo in Madonna's Super Bowl XLVI halftime show.

The duo announced an indefinite hiatus in 2012.