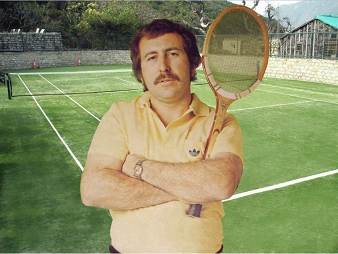 Only those truly worthy to wield the racquet are the ones who survive.
"Game, set, match."
Advertisement:

Tennisnote technically "lawn" tennis, to distinguish it from its predecessor "real", or "court" tennis

is a popular worldwide racket sport, originating as a racket-less game in France during the Middle Ages. In addition to the Bond One-Liner provided above, it is also the source for numerous sex jokes

(Even when we're not scoring, we're in love!). It's regulated by the International Tennis Federation, with the Association of Tennis Professionals (ATP) responsible for the men's game and the Women's Tennis Association (WTA) for the ladies'. The most important tournaments in the sport are Wimbledon, the Australian Open, the French Open (also known as Roland Garros), and US Open; these are referred to as the Grand Slams, but winning all four is known as the Grand Slam. Each of these tournaments is held annually, spread throughout the year.

Tennis history is split into two main parts: Open Era and pre-Open Era. Pre-Open Era, the Grand Slam tournaments only allowed amateur players to compete. As of the Open Era, 1968 - present, tennis is a professional sport with prize money at all events. The advent of the Open Era also heralded standardized and reliable record keeping and consistent tournament rules.

Tennis is largely an individual and pair sport, but team events are not unheard of. The Davis Cup, Billie Jean King Cup, and Hopman Cup are team events (for men, women, and both) from different countries playing each other in a knockout tournament.

The basic game is easy to grasp: one player serves the ball, and they proceed to whack it back and forth over a netnote  though it can also go round the net

until a player unsuccessfully returns the ball in a legal manner. This can happen if the player a) hits the ball into the net, b) hits the ball out of bounds, or c) fails to return the ball before it bounces more than once. Any of these errors will reward a point to the opposing player.

Players can also concede penalty points by repeatedly engaging in 'Unsportsmanlike Conduct'; offenses include verbal abuse directed at officials or players, smashing or damaging racquets or other equipment, deliberately hitting balls at the audience, distracting opponents, and taking too long to serve or change ends. Serious or repeat offenses, such as injuring someone, lead to disqualification, as seen in the 2012 final of Queens.

The game is notable for its ludicrous scoring system:

Believe it or not, the scoring rules are actually even more complicated than this; there are special rules made for tiebreaker games (which is the only part of the scoring system that uses a simple 1,2,3,4,5 counting system); variations such as 'No Ad' scoring (playing a single decisive point when both players reach 40); a 'Championship Tiebreak' instead of a final set; and different combinations of all the above scoring systems. However, this basically captures how you keep score in tennis. Hell of a job.

Tennis matches are played in either singles or doubles matches. In singles matches, the slim side margins (known as the "doubles alley") of the court are considered out-of-bounds; in doubles, they're fair game, hence their name.

The tennis season is a lengthy one and consists of five major events:

But Wait, There's More! In addition to the above events, tennis players are expected to participate in these tournaments:

Suffice it to say that tennis players can consider themselves blessed if they don't get a single cramp or injury during their 10/11-month-long season. Professional tennis is no endeavour for the faint-hearted or weak-legged.

In 1973 a system to rank all professional tennis players was put in place, with separate ranking lists for men and women. The system is points-based and looks only at the last 52 weeks of the calendar.

Basically, players gain points for every match they play (even if they lose), with the number of points increasing the further they progress into a tournament. The amount of points at stake varies with the tournament, with the Grand Slams giving each winner 2000 points and the smaller tournaments awarding anywhere from 250 to 1000 points to the champion. An exception occurred at Wimbledon in 2022, where the All England Club banned Russian and Belarusian players due to Russia's 2022 invasion of Ukraine (with Belarus also involved in it) and the ATP and WTA compromised by awarding no ranking points for the tournament.note The 2022 women's singles final was won by Elena Rybakina, a Russian who lives and trains in Moscow... but got around the ban because she represents Kazakhstan, which has stayed out of the fray.

Only points accumulated in the last 52 weeks are included in the rankings, however, which means that for each yearly tournament the points earned by their players from last year are erased and replaced with their newest results. This means that a low-ranked player can shoot up several ranking spots with a single exceptional performance at a major tournament, but also that the same player can crash back down the ranking list if s/he fails to "defend" their points at the same tournament next year (assuming that their performances at all other tournaments are the same as last year's).

Of course, the official rankings aren't the whole story and it's important to keep in mind that Grand Slams aren't the only events that matter points-wise (in spite of what news coverage of them might imply), which means that it's perfectly possible for a player to not win a single Slam and still finish the year as No. 1 if the Slam points were really spread out among other players and the player performed exceptionally well in all other tournaments. Or for a player to win two Grand Slams and still not be ranked No. 1 if they didn't make it very far in the other Slams and skipped a lot of smaller tournaments — whether these rankings are reliable and put enough emphasis on tournaments like the Slams is often debated. The Player of the Year awards given out at the end of the year are usually more indicative of the actual stand-out players in cases like these.