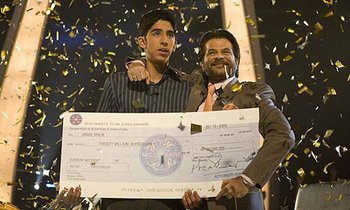 Many game shows throw over-the-top celebrations for their big winners. Often the hapless contestant is showered with confetti, balloons, the cash they just won, etc. and a couple of examples leave you wondering if they're going to burn the studio down. Seen on quite a few game shows in The '70s and The '80s, but became a staple of the multi-million dollar game shows and large-scale talent search shows of The Aughties.

Mario is showered with confetti when he presents his Royalty Pass at the Shogun Studios gate.

Mario is showered with confetti when he presents his Royalty Pass at the Shogun Studios gate.