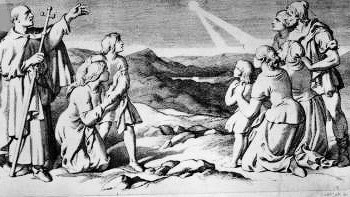 Lose 1 Stability.
"When beggars die there are no comets seen; The heavens themselves blaze forth the death of princes."
— Calpurnia, Julius Caesar by William Shakespeare

Before people had telescopes, comets were frightening objects of awe and wonder that seemed to appear out of nowhere, blazed brightly in the sky, then vanished as quickly as they came. Older Than Dirt, the "falling stars" mentioned in The Epic of Gilgamesh were possibly a reference to comets or meteor showers. For thousands (and perhaps tens of thousands) of years, they were seen by civilizations around the world as omens of good and ill, pronouncing the deaths of kings, horrible disasters, and military victories. Western civilizations have generally categorized them as harbingers of evil, but the universal consensus is that when a comet appears, something momentous is happening, enough so that the heavens themselves have taken notice.

In 1705, astronomer Edmund Halley noticed that the comets of 1531, 1607, and 1682 all had the same orbit and period. Suspecting that the three were actually the same comet, Halley predicted not only that it would appear again in 1758, but in what part of the sky, and in what orbit. It appeared exactly when and where he said it would, and Halley's Comet not only acquired a name, but put an end to the thought that a comet was some supernatural envoy of doom.

Be that as it may, comets remain cool, and they are still used in media as the first, last and only suitable omen for truly world-shaking events. Such as said comet coming straight at you...