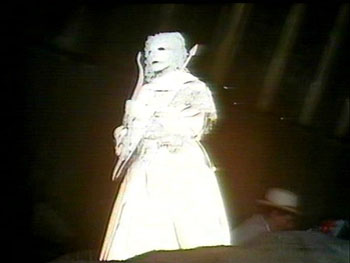 It's Doctor Who's silver (25th) anniversary special... and it's obvious, thanks to the absurd number of silver and chrome-coated scoundrels in this story.
The Doctor: I don't suppose you've completely ignored my instructions and secretly prepared any Nitro-9, have you?
Ace: What if I had?
The Doctor: Naturally, you wouldn't do anything so insanely dangerous as to carry it around with you, would you?
Ace: Of course not. I'm a good girl, I do what I'm told.
The Doctor: Excellent. Blow up that vehicle.
Ace: *delighted grin*
Advertisement:

The one where the Doctor wears a fez... before wearing a fez was considered cool.

Written by Kevin Clarke. This three-episode serial first aired from November 23 to December 7, 1988 — starting the day of the big two-five. (The whole serial aired November 25 in New Zealand.)

The Doctor and Ace visit England in 1988, where three rival factions – the Cybermen (whose costumes are a lot more reflective this time around), a group of Neo-Nazis and a 17th-century sorceress named Lady Peinforte – are attempting to gain control of a statue made of a living metal, validium, that was created by Rassilon as the ultimate defence for Gallifrey.

The statue has three components — a bow, an arrow and the figure itself — that must be brought together in order for it to be activated. They have been separated since 1638 when, in order to foil the first attempt by Peinforte to seize it, the Doctor launched the figure into orbit in a powered asteroid.

This asteroid has been approaching the Earth at twenty-five yearly intervals ever since, leaving a succession of disasters in its wake, and has now crash-landed near Windsor Castle.

The Doctor plays the three factions off against one other and eventually appears to concede defeat to the Cyber Leader. However, this is just part of a carefully laid trap, and the Cybermen's fleet is totally wiped out by the statue.

"Silver Nemesis" was promoted as the show's 25th anniversary special; the first episode airing on the anniversary itself. Because of the broadcast rearrangement to facilitate this, it aired before "The Greatest Show In The Galaxy", but clearly follows it in chronological order. Also, unlikely as it may seem, this is the first Doctor Who story to feature actual Nazis, rather than Nazi analogues.