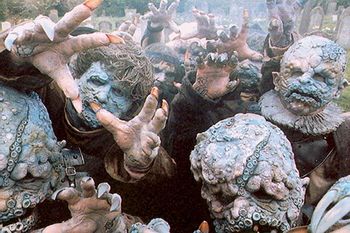 The penultimate classic story goes out of its way to give us all bloomin' ginormous night terrors.
"I am the only one left now. I raise these stones to my wife, Astrid. May she forgive my sin. The day grows dark, and I sense the evil curse rising from the sea. I know now what the curse of Fenric seeks: the treasures from the Silk Lands in the east. I have heard the treasures whisper in my dreams. I have heard the magic words that will release great powers. I shall bury the treasure for ever. Tonight, I shall die, and the words die with me."
Advertisement:

The one where the Doctor has to break a heart to save it.

Written by Ian Briggs. This four-episode serial first aired from October 25 to November 15, 1989.

The Doctor and Ace step out of their TARDIS into a 1940's English naval base near Maiden's Point on the Northumbrian coast during World War II. Befriending the base personnel, they learn that the base, run by Commander Millington, is being used as a listening post where Dr. Judson is using his ULTIMA machinenote That would be Alan Turing and the ENIGMA machine. to crack inscriptions written on a Viking crypt beneath the base, warning of a being called Fenric, which has attracted Millington's attention believing he can gain Fenric's power. Outside the base, the Doctor and Ace discover a covert squad of Soviet commandos, led by Captain Sorin, who are seeking to capture ULTIMA for themselves; the Doctor warns them to stay low, while Ace and Sorin become smitten with each other.

The Doctor and Ace find a glowing Oriental vase, a treasure captured by the Vikings and left in the catacombs, but it is taken by Millington when they return to the base. As Millington and Judson prepare to use ULTIMA to decipher the writings on the vase, vampire-like Haemovores begin to emerge from the sea, attack and convert the English and Soviet troops and other residents into more Haemovores. When Judson runs ULTIMA with the vase, energy strikes Judson, and he becomes infused with Fenric. Fenric begins to give orders to the Ancient One, an old Haemovore in control of the other monsters, to continue to assault anyone in their path. Ace is able to warn one of the women of the Women's Royal Naval Service, Kathleen, in time for her to escape with her newborn child, Audrey.

The Doctor reveals he has previously faced Fenric, an ancient evil since the dawn of time, besting him by challenging him at a chess problem. Arranging another chess problem in the same room where the nerve gas has been stockpiled, the Doctor is able to delay Fenric while he runs off to seek a more permanent solution. Sorin, the last remaining member of his squad, enters the room and prepares to shoot Fenric, but Fenric reveals that Sorin is one of his "wolves", having descended from the Vikings that carried the cursed vase to the English shores, and takes over his body. When Ace returns to the room, she unwittingly helps Fenric, in Sorin's body, to solve the chess problem. The Doctor arrives too late, as Fenric can no longer be stopped. Fenric orders the Ancient One to attack the Doctor, but a psychic barrier created by Ace's trust in the Doctor prevents the Ancient One from acting. When Fenric threatens to kill Ace, the Doctor tells him to go ahead, revealing to Ace that she too is one of Fenric's pawns and that he has known so ever since he met her on Ice World. It was Fenric, he explains, that created the time storm that transported Ace there in the first place. Furthermore, by saving Kathleen and Audrey, she has assured that the cycle remains unbroken, as Audrey will grow up to become Ace's mother whom she despises. Why else, he asks, would he invest so much in some anti-authoritarian urchin? It's not as though he cares about her. Ace's faith shatters, causing the psychic barrier to drop, but instead of attacking the Doctor, the Ancient One grabs Fenric, pulls him into a sealed chamber and releases a lethal dose of the gas. The chamber explodes, killing them both. The Doctor pulls Ace out of the store as it explodes behind them.

The Doctor tries to explain to Ace that he didn't mean what he said, but had to break Ace's faith in him to allow the Ancient One to act. He would have done anything not to hurt Ace, but he had to save her from the curse. On the shores of Maiden's Point, Ace wonders why she cannot stop hating Audrey, her mother, even though she loved her as a baby. Ace dives into the bay, no longer frightened of the water, and surfaces, liberated. Now truly able to be friends and with no more secrets between one another and no-one playing intergalactic games with either of them, the Doctor and Ace walk off back to the TARDIS.