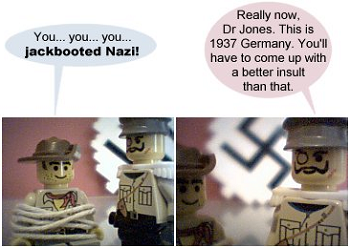 "I was walking down the street the other day and this man actually called me a Chink. I was so mad! Chinks are Chinese. I'm Korean. I'm a Gook. If you're going to be racist, at least get the terminology correct."
— Margaret Cho
Advertisement:

A Wrong Insult Offence occurs when one character attempts to insult another and hurls what they think is an appropriate insult in the other character's face. The second character considers this and then calmly replies, listing all the reasons why that particular insult does not apply to them and helpfully suggesting a more appropriate insult they could use.

As a piece of characterization, this usually indicates that the insulted party does not take the insulter seriously. Alternatively, it could just indicate that the second party is a shocking pedant.

Bonus points if the insult they suggest is worse than the original one.

A Sub-Trope of Do Wrong, Right.

If someone objects to the spelling or grammar of the insult, but not the insult itself, that's Grammar Correction Gag.

Compare Insult Backfire, Insult Misfire, I Take Offence to That Last One, Insistent Terminology. The inverse is You Know I'm Black, Right?