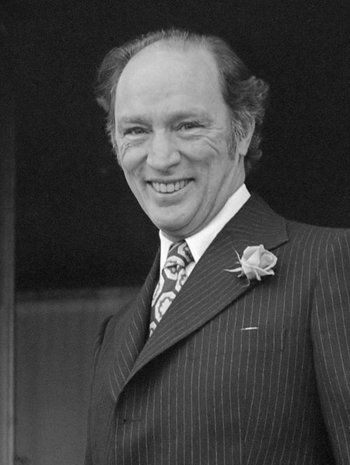 "A man who tries to please all men by weakening his position or compromising his beliefs, in the end has neither position nor beliefs. A man must say what he believes clearly, without dogma, and without guile."
Advertisement:

Joseph Philippe Pierre Yves Elliott Trudeau CC (October 18, 1919 – September 28, 2000) was Canada's 15th Prime Minister, one of its longest serving and one of its most controversial.

A Catholic conservative Quebec nationalist in his school days in the 1930s and early 40s, he grew disillusioned with that ideology (and its quasi-fascist overtones) through his studies abroad and turned to the left and Canadian federalism. In the late 1940s through the 50s, Trudeau was sympathetic to the Co-operative Commonwealth Federation (predecessor to today's New Democratic Party), the standard-bearer of the socialist and social-democratic movements in Canada. However, by the time he decided he would formally enter politics in the early 1960s, Trudeau was increasingly critical of the CCF/NDP for its failure to make common cause with the Liberals against John Diefenbaker's Tory government and for its apparent support for a "binational" Canada, rather than the federalism he envisioned. Also, by the 1960s, Trudeau had become skeptical of the NDP's ability to achieve national power. Thus, when Trudeau first stood for Parliament, he did so as a Liberal, hoping his profile in Quebec would land him a post in the Cabinet.

Trudeau's hopes were not in vain; less than a year and a half after first winning a seat in the 1965 general election, Trudeau was appointed Justice Minister in April 1967. During that time, he made a distinctive presence beyond his portfolio such as when he stood up to French President Charles de Gaulle when he violated all diplomatic propriety with his "Vive le Québec libre!" outburst, thus fanning Quebec separatism. Namely, Trudeau publicly mused about how would the Frenchman would have liked it if the Canadian Prime Minister went to France and roared, "Brittany for the Bretons!" which provoked De Gaulle to expose his own hypocrisy when he got huffy at the logical question about diplomatic meddling in another nation's internal tensions.

A while later, Pearson retired, and Trudeau himself was voted by the party to replace the retiring Pearson, and headed the 1968 federal election. Already riding a solid campaign, the event that really sealed the deal was during St. Jean Baptist Day in Montreal, the day before the voting, when Trudeau attended the annual parade. There, Quebec sovereignists rioted in the streets and threw rocks and other objects at the grandstand where Trudeau sat; his aides urged him to leave, but Trudeau outright refused to be intimidated by the mob and stayed in his seat staring down the hooligans. This was all caught on camera and the electorate was impressed enough to vote Trudeau a strong majority government.

This set off a fad called "Trudeaumania", in which Trudeau was literally mobbed like a rock star. His policies helped feed that good feeling such as abolishing the legal ban against homosexuality (As Trudeau noted, "The state has no place in the bedrooms of the nation"), eased up divorce laws and set up efforts to promote bilingualism so the French speaking population could feel that they had a real place in all of Canada.

In foreign policy, Trudeau was a master diplomat. For instance, he stole a march from the United States in foreign policy when he formally recognized the isolated Communist China in 1970, making Canada one of the first to do so and before US President Richard Nixon dared. Trudeau also managed to punch above his country's weight like when he got Canada included as a part of the G-7, the formal organisation of the world's most powerful economies. As for dealing with the the United States, as much as Trudeau was aware of the diplomatic realities of being next door to a often temperamental superpower, which he likened to "sleeping with an elephantnote , no matter how friendly or even-tempered the beast, we are affected by every twitch and grunt," he was not intimidated by its leadership. For instance, when it was discovered that Nixon called him an "asshole," Trudeau nonchalantly shrugged and quipped, "I've been called worse things by better people."

However, one of his greatest tests was in 1970 when Quebec separatist terrorists, the Front de libération du Québec (FLQ), kidnapped British Trade Consul James Cross and Quebec Minister of Labour Pierre Laporte. Trudeau decided to come down hard on these attacks and when asked how far he would go, he responded, "Just watch me!"

So, Trudeau invoked the War Measures Act, which put Canada in a State of Emergency much like martial law, complete with mobilizing the army to increase security. While some principled politicians like Tommy Douglas condemned this as excessive, the move was immensely popular with much of the Canadian public and the forceful response took violence off the table for the cause of Quebec Separation permanently.

Throughout the 70s, Trudeau had to struggle with the economy — then in the midst of the stagflation doldrums — and the rise of Quebec Separatism as a political force, as the separatist Parti Quebecois took power in Quebec in 1976 and prepared a referendum on the issue. Although Trudeau lost the 1979 election, he came roaring back in 1980 to become Prime Minister again and led the fight for the No side for that referendum in 1980 which ended with his side winning 60% to 40%.

His relationship with the Western provinces soured as well, especially when Trudeau tried to respond the notorious energy crisis of the era by creating the National Energy Program. This was to have the federal government take a stronger involvement in the energy sector, a provincial responsibility, and the western provinces complained that this intrusion was disrupting their economy. The ill feeling got so bad that the idea of the western provinces separating from Canada, ie. the Western Canada Concept, got some traction for a while.

After that, Trudeau struggled to reform the Canadian Constitution to finally give Canada full practical political independence from Britain. The negotiations were long, arduous and acrimonious (with Quebec complaining of being sidelined), but a constitution was achieved with a Charter of Rights and Freedoms which spelled out specific constitutional rights for the first time for Canadians, including the equivalent language of the USA's Equal Rights Amendment, which was struggling in its ratification fight.note albeit with a bitter compromise of a "Notwithstanding Clause" that enabled parliaments to ignore court decisions on most rights outside voting rights for up to five years, which thankfully has become largely politically unthinkable for the Federal Government to use.

After that, Trudeau retired in 1984, but still remained an elder statesman in Canada, such as when he denounced proposed constitutional reforms like the Meech Lake Accords. When he died in 2000, he was hailed as one of the great Canadian figures with a massive state funerals that had mutual enemies like former US President Jimmy Carter and Cuban Dictator Fidel Castro attending. In 2004, Trudeau was ranked #3 Greatest Canadian, topped only by the heroic athlete/cancer activist Terry Fox and the aforementioned socialist politician Tommy Douglas (he invented Canada's single-payer healthcare system).

For years, Trudeau was the face of Canada with a strong liberal legacy that his political opponents like Brian Mulroney and Steven Harper were determined to extinguish. However, his Liberal successors — including his own son, Justin, who became Prime Minister (the first child of a former PM to do so) in 2015 with a massive Liberal majoritynote And sparking off an international Trudeaumania of his own, as a Prime Minister with high ideals and movie star looks — have managed to keep that legacy alive and (in Justin's case) even expand upon it.