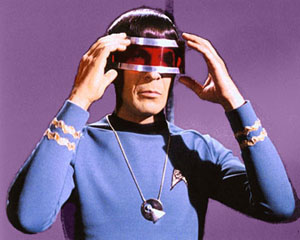 "Captain, the Goggles Do Nothing. Your posterior is still as wide as it was before."
"Take nothing on its looks; take everything on evidence. There's no better rule."
— Mr. Jaggers, Great Expectations
Advertisement:

"Captain, the logical course of action in this situation is to let the inhabitants of Pupolon fend for themselves. We need the device keeping the planet's orbit stable, or risk endangering the very existence of The Federation. I am aware of the consequences for the local population, Doctor, but simply rushing in to 'save the high priestess' will leave us open to a Klingon ambush with a 78.52% probability of outright destruction.

The Spock is an archetype that can be loosely summed up as the tendency to apply rules, reason and the greater good to all of their decisions — in other words, a character who will always think before acting. This character can exist by themselves, but more often, they will have a more emotional and humanistic counterpart to contrast their decisions. The main difference between the two archetypes is that while The McCoy will leap before looking, The Spock's solution to problems will have a balanced and well-thought out approach. When put in a Power Trio (or Freudian Trio) with The Kirk and The McCoy, this character becomes the Superego.

The Spock's relationship with their crewmates/comrades is often tense, because this character type is willing and able to ruthlessly consider ethically troubling situations without batting an eye — especially situations where people might be ordered to die. While their counterpart The McCoy is interested in doing the right thing regardless of cost, The Spock is more interested in the end result. For them, everyone, (including themself) is expendable if it is necessary to complete the mission, and they have no problem treating people as such.

The Spock maintains audience sympathy by being willing to Take a Third Option and also by being as ruthless about their own life as the lives of their crewmates, if not more so. Even better, they are utterly unflappable in the face of serious problems or danger; their friends know that no matter how terrifying or hopeless things get,they will never lose their cool and will not stop working on a solution to save everyone (which The McCoy does respect about them). And finally, they are perfectly willing to hear out The McCoy.

The Spock will at times become a Tin Man, though this varies with the writing, and will often have No Sense of Humor. When they have emotion, they may sometimes express it with a Fascinating Eyebrow and nothing more. Since Smart People Play Chess, if The Spock plays a game, it will invariably be a variant of chess.

Closely related to The Stoic, Agent Scully, Emotionless Girl, and Little Miss Snarker. Often becomes a Straw Vulcan, but occasionally ends up on the winning side of Emotions vs. Stoicism. Probably sides with the Enlightenment in Romanticism Versus Enlightenment. Well Intentioned Extremists often come across similarly when they believe they're working for the greater good. See also Spock Speak.

This character type is Shoot the Dog personified.

Named (obviously) for Spock from Star Trek. Compare their eternal opposite, The McCoy.

Horace tries to encourage Torque to do the right thing and help him escape Carnate, doing so as penance for his misdeeds and to prevent Torque from sharing his fate.

Horace tries to encourage Torque to do the right thing and help him escape Carnate, doing so as penance for his misdeeds and to prevent Torque from sharing his fate.