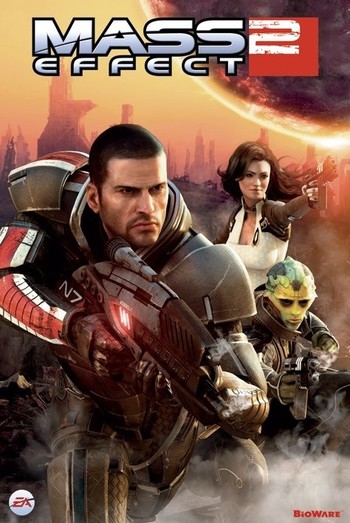 Ladies and Gentlemen, our heroes: A dead man (that's you), a terrorist and an assassin. And they're some of the more respectable ones.
"We have to give everything...even if that means our lives. We will stop at nothing! We will fight for the lost!"
— Commander Shepard
Advertisement:

The second game in the Mass Effect series.

One month after the events of the first game, the Normandy is destroyed in a vicious attack by an unidentified aggressor and Commander Shepard is killed in action. Two years later, Shepard reawakens to find that Cerberus, a mysterious human supremacist organization, has retrieved and revived the commander at great expense; human colonies have been vanishing, and an enigmatic and advanced alien race, known as "the Collectors", is behind it. Forced to work with Cerberus and their leader, the Illusive Man, Shepard must now assemble a team and take the fight to their mutual enemy.

They call it a suicide mission. Prove them wrong.

The plot structure of Mass Effect 2 is unique among BioWare games and, indeed, among Western RPGs at large. While it does feature classical BioWare-style quest hubs (Omega, Citadel, Ilium, Tuchanka), a bulk of the plot consists of companion recruitment and Loyalty Missions that aren't tied to a particular hub and can be completed in any order. At the start of the game, you receive your spaceship, two starting party members, Miranda Lawson and Jacob Taylor, and a handful of leads on potential further recruits (eight in total, or ten with DLC), including two from the first game. Once recruited, they eventually present you with an optional "Loyalty Mission"—a personal sidequest that provides not only the standard RPG rewards of cash, EXP and new gear, but also Character Development and new powers for the party member in question. Interspersed between these are several investigations issued to you by the Illusive Man, in which you examine the Collectors, figure out where they came from and what they're up to, and eventually travel through the Omega 4 Relay to strike at their home base. While completionists will want to recruit everyone and upgrade everything, players in a hurry (or who want to challenge themselves by completing the mission with minimal resources) can jump through with minimal support and training, and still win (though reality ensues in terms of how many people survive).

There is a great deal more interactivity with this game than there was with the first. The big thing is that if you import a character you played from the first game, you take with them all of the choices they made and the people they interacted with as being a part of this game in some way, ranging from your romantic option still having feelings for you to very minor characters who you barely recall talking to. The Paragon/Renegade options are more reliant on the choices you make; acting like a Paragon gives you a higher Paragon score and the same with Renegade, and the higher score gives you more opportunities to use them (in the first game, being able to initiate a charm or intimidate option was based on how you allocated leveling points). It was also spruced up with the addition of "interrupts," essentially quick time events that allow Shepard to interject an optional Paragon or Renegade action during conversations (such as shutting someone up pre-emptively, or hugging someone in pain). These may make your mission harder or easier, but you get an extra reward for using them.

On the gameplay side, many things were refined. Neither you nor your squad members are given weapons you are incapable of using properly. Weapons themselves require "thermal clips" for everything except the heavy weapons (meaning part of the game is looking for more ammo), and as your preferred gun runs out you are forced to switch to a less-preferred gun. The Take Cover! mechanic is a vital element and you will not last long without using it, although properly designed Sentinels or Vanguards are close to unkillable. The armor and equipment of the characters is a uniform system that depends on technology you gather during your missions, and while you can change their look (at least one base outfit and another when their loyalty mission is complete), it is purely cosmetic (Shepard, however, has interchangeable armor components which provide different bonuses). You are given the option of leveling up a character and changing their weapon loadout before every mission, and leveling up is a tier-based system, each additional level requiring more points to acquire. The combat abilities are simplified; there are fewer attacks to use, and the new unified cooldown system means that you don't have to keep checking the power wheel to see if all of your powers have recharged, because you can only use one at a time. However, certain abilities can now combo together for more damage, and there are also more variations available between the different classes (for example, you have three full biotics on your team, each with different biotic-based abilities).

The series has spawned Cerberus Daily News, a defictionized news site that would (for a time) provide daily updates detailing events in the ME universe, most of it having no bearing whatsoever on the story in the first two gamesnote In the lead-up to the release of Mass Effect 3, the in-game Cerberus Daily News, seen on the main menu screen, was reactivated after a full year with no updates, with small snippets of information about comm buoys going off-line as the Reapers prepare their invasion. It also hosts forums full of roleplayers who constantly react to said news and act out in-universe storylines of their own making. Finally, there is a proliferation of DLC: two new squad members, at least two stand-alone side missions, and a number of weapon packs, armor packs and alternate costumes for Jack, Thane, Garrus, Miranda, Grunt, and Tali. The most important DLC, though, are "Lair of the Shadow Broker" and "Arrival," which BioWare call "bridging" content because they help to set up Mass Effect 3. Both of them add completely new story events to the game. The former includes Liara as a temporary squadmate as you storm the lair of the Shadow Broker; the second is a Shepard solo mission as you rescue an undercover Alliance operative who has discovered proof that the Reapers are coming soon and needs help preventing their eponymous arrival.