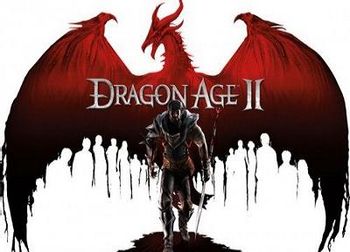 Not only am I taking your Blood Dragon Motif, but I raise from the blood spider things with silhouettes of people!
"So... you want to know about the Champion?"
— Varric
Advertisement:

The sequel to BioWare's acclaimed Dragon Age: Origins and the second installment of the Dragon Age series, released on March 2011.

The game tells the story of Hawke, a human hero who is destined to become the famous Champion of Kirkwall. Following the destruction of Hawke's hometown during the Fifth Blight, Hawke flees overseas with their family to the city of Kirkwall. Over the next decade, Hawke goes from an outcast refugee to revered icon, but the story of just how that reputation was made remains to be told...

The game makes several significant changes from its predecessor. The art style has been changed to what has been termed "Stylised Realism," in an effort to make an "ownable" art style. Departing from the three races and multiple backgrounds available in the last game, the protagonist is now a single predefined human character, male or female, with the standard three specializations of warrior, mage or rogue. Additionally, the Player Character is now fully voiced and also features a conversation wheel much like Mass Effect; however, instead of moral intent it tracks the inflection of the response as either compassionate, sarcastic, or blunt.

Another departure from Origins is the fact that until the third act, most of the game is on a smaller, more personal scale. It deals primarily with Hawke's personal growth, the lives of their friends and family, and the politics and intrigues of the city of Kirkwall, all playing out over the course of seven years.

Three DLC add-ons have been produced for the game. The day one DLC The Exiled Prince (included in the BioWare Signature Edition) added the ninth permanent companion, the pious archer Sebastian Vael, and his personal questline. The first post-release DLC was Legacy, in which Hawke learns more about their father's past, and the second was Mark of the Assassin, where Hawke teams up with Tallis, Felicia Day's character from Dragon Age: Redemption, to break into an Orlesian noble's castle. An Expansion Pack titled Exalted March was planned, but was cancelled so the development team could focus on the next installment of the series; some of the elements from the unfinished expansion were included in its plot.

A tie-in novel has been published; Dragon Age: Asunder is set in Orlais shortly after the events of Act 3, but before Varric's interrogation. It expands upon the mage/Templar conflict. An anime, Dawn of the Seeker, serving as an Expansion Pack Past for Cassandra Pentaghast, was released on May 29, 2012.