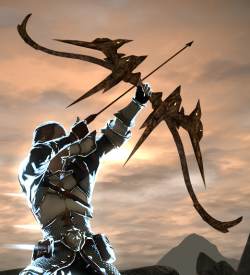 Nope, it's not visible even against the sun.
Advertisement:

Probably everyone knows how bows and arrows work - you hold the wooden part of the bow, you attach the arrow's non-pointy end to the bow's string, you pull the arrow while stretching the bow and its string, you aim, and then you release the arrow, letting the physics catapult it in the desired direction.

It's a no-brainer that a string is strictly necessary in a bow. It's not very thick, but it's there, and you can clearly see it. This trope, however, applies to a situation where the string in a bow is clearly missing, and yet the bow is still being used as if it actually was there.

In video games with 3D graphics, the creators can sometimes decide to cut corners that way when creating models of bows, often due to technical limitations, time and money issues, simple oversights, unforeseen bugs, etc. Depending on how obvious this practice is, it can result in the players' loss of their Willing Suspension of Disbelief when they look at the characters pulling the arrows on air, with no reasonable explanation. This is also an occupational hazard with toys or miniatures, which tend to have trouble getting a good bowstring (especially if they want to actually do an archery pose). Can be considered justified in the case of a magical weapon (whether or not it's an Energy Bow). Presumably there is a magical "string" or force field or something that is providing the potential energy. Theoretically, could also be applied in the case of sufficently advanced technology: since while one needs something to transfer the energy into the arrow, it needn't be a physical object.

Can be a subtrope of Lazy Artist, unless justified. Can overlap with Energy Bows, which lack strings sometimes. See also Hitscan for another weapon trope brought about by technical limitations.