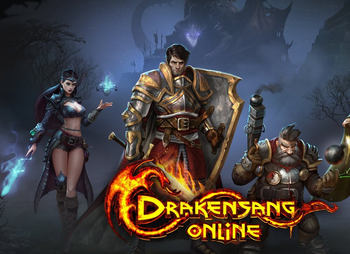 Drakensang Online is a 3D Free-to-Play browser-based fantasy-themed MMORPG published by Bigpoint Games in 2011. It is part of the Drakensang series (though In Name Only, as detailed below).

Here, players enter a world in utter peril as monsters from the dark realm have broken free and are wreaking havoc in the lands of Grimmagstone and Shorefolk and beyond. To make matters worse, the prince of the kingdom has vanished, war has broken out in the north, and a long-forgotten cult has arisen again. Not to mention, there are rumors running amok that the dragons of the Anderworld are going to return to annihilate the human race. To be said bluntly, a bloody war of survival between the beasts and mankind has begun. What happens next will determine the fate of the races, and the world itself.

However, there is hope left for mankind. This is where players come along, and step into the role of a Dragonknight, a Spellweaver, a Ranger or a Steam Mechanicus on a mission to end the chaos reigning, and return the world to relative peace. Complete quests, kill challenging and gruesome creatures, explore dungeons, team up with other players, and participate in the arena battles for glory. Become part of history, as one of the warriors who helped save mankind.

The main website of the game can be found here