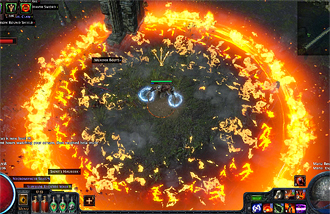 Who needs to aim when you can just hit everything?
Advertisement:

Some effects, rather than having a single target, affect everything within a given area. This area is the "area of effect", and attacks/buffs that work this way are called area of effect attacks/buffs. Popular in Tabletop Games and Strategy Games, area of effect attacks are very useful for taking out large numbers of weak enemies simultaneously. However, they'll usually avert Friendly Fireproof, adding another layer of strategy to their use. They aren't necessarily offensive in nature, either — healing or protection abilities often work in an area of effect as well.

Common forms taken by these attacks include powerful explosions, waves of fire, storms and blizzards, and other elemental phenomena that can cover a wide area. Abilities that call down rains of damaging projectiles, such as a Rain of Arrows, Storm of Blades, or multi-bolide variant of Meteor-Summoning Attack, also tend to take this form. Less orthodox variants can also include the summoning of large swarms of biting or stinging creatures.

Super-Trope to Splash Damage, but while splash damage falls off the farther away you get from the center of the attack, area of effect attacks affect everything in its area equally. Supertrope to Herd-Hitting Attack. See also Splash Damage Abuse, when an Area of Effect is abused to get enhanced performance out of the ability. If the "effect" within the area of effect is "instant, horrible death," then you're looking at an attack with an "Instant Death" Radius. Compare Smart Bomb, which involves the entire screen.