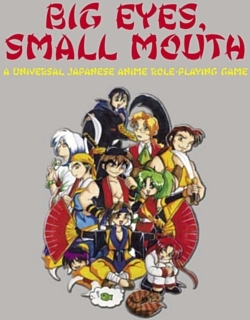 In retrospect, men appreciate that it was a colourful apocalypse.
— Uresia: The Grave of Heaven, S. John Ross
Advertisement:

Big Eyes Small Mouth is a multi-genre Tabletop RPG created by the now-defunct Guardians of Order. Conceived as a system to allow people to play out games in the style of anime series, it was first released at GenCon in 1997. The name comes from a common generalization of the typical anime and manga character designs, which have proportionately large eyes and small mouths.

A number of supplemental rule books have been released, with additional rules and character creation options to provide specific advice for running games in a certain genre. For instance, the supplement Hot Rods and Gun Bunnies contains information on running a Gunsmith Cats or Riding Bean-style game, while Big Robots, Cool Starships has rules for designing Mecha and running Space Opera-style games. Most of the extras in the supplements were folded into the second edition of BESM.

There are two other kinds of supplements produced by Guardians of Order. Stand-alone game worlds such as Uresia: The Grave of Heaven and Centauri Knights, and licensed supplements based on various anime series, such as Slayers, Serial Experiments Lain and Sailor Moon. Licensed supplements that were mostly or completely background information about the show's world were released with the misleading title of "Ultimate Fan Guide".

BESM uses the Tri-Stat System designed by Guardians of Order, and was their flagship product for that system. Tri-Stat is a Point Build System where characters are defined by three statistics: Body, Mind and Soul, as well as a number of Attributes and Defects. A d20 System version of the game was also released around the time of Dungeons & Dragons 3.5. GOO had a third edition of BESM ready when it collapsed. The rights were sold to the game company White Wolf, which published it (for a short while anyway; the now discontinued third edition book sells for over $100 on the Internet, but you can buy .pdfs) and now provides what support remains for the Tri-Stat system. In 2019, Dyskami Publishing

licensed the rights to BESM from White Wolf and successfully Kickstarted a fourth edition, with the PDF being released in December while the physical version was delayed until Q1 2020 due to getting held up at the printers by rights issues.

This tabletop game provides examples of: