Tabletop Game / Beyond the Pale 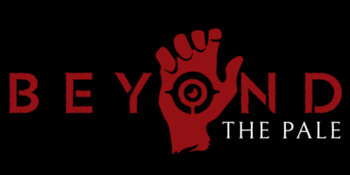 Modern Monsters, Magic and Mystery
Beyond the Pale is an independent Tabletop RPG currently in development. In it, folklore, religion, mythology all had elements of truth but humanity rarely saw things for what they truly are. Now, in the modern age, the supernatural world thrives, hidden from view. Elves and trolls live in cities, out of sight, vampires stalk alleyways and even worse things linger in the dark, on the edges of human perception. Humans that see past the glamour and become aware of the supernatural are said to be "Beyond The Pale".
Advertisement:

Beyond the Pale’s creator is also publishing a series, set in the same universe, about Ellie Nott and her dealings with the hidden world. The first complete story, The Girl, can be read here

The game’s official blog can be found here

Tropes within the general setting include:

Tropes within the Ellie Nott series include: