One to Million to One 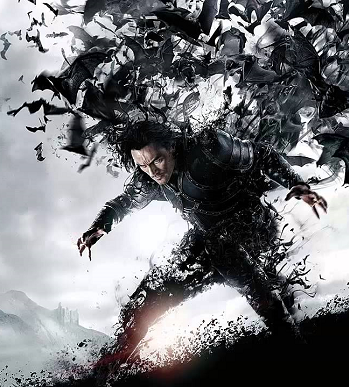 A person has just been hit by a laser beam, or a truck. The person doesn't fly off into space, though. Instead, he shatters into hundreds of... animals? Which then flock over in unison to a different spot? Then regroups into that person again, whole and unscathed?

Alternatively, the person may not be in imminent danger of being splattered into pieces involuntarily, and merely decide to scatter himself into many many tiny bits which then fly away elsewhere. And even then, the go-elsewhere part is also optional; the person may just scatter into dust lest a truck runs him over.

Most of the time, the person in question has a superpower, or may also be supernatural, or may be in fact The Worm That Walks. Or they're just a vampire (in which case the animals are almost always bats).

Unlike in the case of Literally Shattered Lives, those employing this trope don't die from being shattered. See also Pulling Themselves Together, which is similar to the second half of this trope, and generally trauma-induced. Blob Monster and Elemental Shapeshifter can do something similar to this. Literal Split Personality may also result. Compare also Detachment Combat if they just detach their body parts rather than breaking down to flying pieces. Related is Destructive Teleportation that employs a method similar to this, i.e breaking the subject into atoms and then reconstructing them in another place; people who have this as an ability might achieve long-distance movement similar to a teleport this way. Compare Me's a Crowd and Asteroids Monster.

Not to be confused with Million-to-One Chance.

The three daughters of Lady Dimitrescu have the power to dissolve into swarms of flies, allowing them swift movement and virtual invincibility in combat.

The three daughters of Lady Dimitrescu have the power to dissolve into swarms of flies, allowing them swift movement and virtual invincibility in combat.