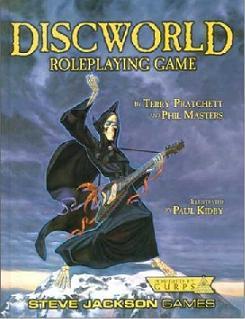 It's a game set in a world where this happens. What more do you need to know?
The Discworld Roleplaying Game is a GURPS sourcebook by Phil Masters based on the Discworld novels of Terry Pratchett. It was originally published as GURPS Discworld in 1998 and repackaged as Discworld Role-Playing Game in 2002 to make it clearer you didn't have to have GURPS Basic Set in order to play, because the book included a copy of the minimal "GURPS Lite" rule set. A supplement, GURPS Discworld Also, was published in 2001; this updated the background information up to The Truth, included character templates, and gave four possible campaign settings not entirely taken from the novels — the Klatchian town of Al-Ybi, the New Town of Smarlhanger on the Sto Plains, the pirate haunts of the Brown Islands, and the cart-warrior regions of EcksEcksEcksEcksian outback — along with some scenarios, the longest of which were "Lost and Found" (about an expedition to the Disc's counterpart of Darkest Africa) and "Sektoberfest in NoThingfjord" (which combines Oktoberfest, Horny Vikings, and Australian backpackers).
Advertisement:

There were also a number of articles and scenarios for the game in Pyramid magazine, one of which — "A Fist Full of Tunes You can Whistle"

— was originally published in the short-lived UK roleplaying magazine Visions as "A Fistful of Dwarfs". (This material was subsequently made freely available on Steve Jackson Games' Web site.) Then, at the end of 2016, a new edition of the sourcebook/game

appeared, updating the setting information up to Snuff and integrating a set of customised rules based on GURPS 4th edition. This included revised and sometimes abbreviated versions of much of the setting and scenario material that first appeared in Discworld Also.

These books describe themselves as "officially unofficial", meaning that while they are a licensed product written in consultation with Sir Terry, he reserved the right to contradict them in the novels if he had a better idea. As such, they can be considered Word of St. Paul.note A case in point; the first edition was written before Terry had established how waste disposal worked in Ankh-Morpork, and a scene in one of the adventures is set in a municipal rubbish tip, run by a journeyman in the Guild of Plumbers. In the second edition, this has been reworked to make him an employee of Harry King.

Elements of the first edition are mapped onto one standard set of Player Archetypes here.

Besides the tropes in the novels and games-related tropes inherited from the full GURPS system, the setting contains examples of: