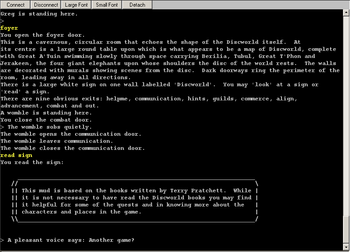 Yep, your character reads the game options inside the Discworld itself.
Discworld MUD

is a free-to-play Multi-User Dungeon launched in the early 1990’s, based on Terry Pratchett’s Discworld series. It's possible to meet many characters and travel to the areas seen in the books. So far, the MUD seems to take place during the events of Night Watch or The Truth, but it’s hard to tell. New features are constantly added to the game.
Advertisement:

The player starts as an Adventurer and can choose to join one of six player-runnote except for warriors guilds: Assassins, Priests, Thieves, Warriors, Witches, and Wizards. Each guild has a number of specialisations and different primaries. Or the player can stay an adventurer. And there’s much more to that.