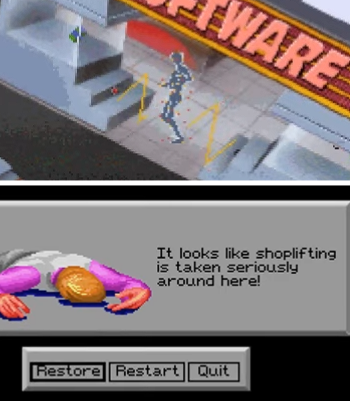 "I wasn't kidding when I said pay! Now, you'll pay the ultimate price!!"
— The Town Tool shopkeeper in The Legend of Zelda: Link's Awakening, if you steal from him and then reenter his shop after.
Advertisement:

In some games, the player is expected to grab everything not bolted down. In other games, you have the option of not paying for wares at a shop, but doing so makes a shopkeeper attack you or send powerful mooks against you. Often, the attacker will be an Invincible Minor Minion that you have no choice but to outrun. Good luck with that. Other times, they'll just be brutally overpowered, to the point that they could probably tackle the dungeon themselves and conquer it without even breaking a sweat. Either way, you'll probably be wondering why you're even allowed to try to shoplift, seeing as it near-inevitably results in you suffering Yet Another Stupid Death.

See also Badass Bystander, Super-Stoic Shopkeeper. Compare Ballistic Discount, Disproportionate Retribution, Can't Get Away with Nuthin', I Fought the Law and the Law Won, Video Game Cruelty Punishment and Scolded for Not Buying.

Action-Adventure
Adventure
Beat 'em Up
Advertisement:
First-Person Shooter
Platformer
Point and Click
Roguelike
You'll probably notice that this folder's a bit bigger than the others. It's not clear whether it's the relative lack of lasting impact due to being contained within a single run, the smaller size of the game allowing for more options, or just developers finding it amusing to watch players get lit up for being greedy—this trope is a longstanding tradition of the Roguelike genre.