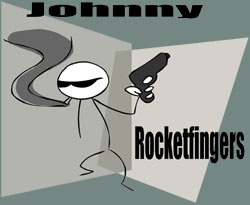 Johnny Rocketfingers is a point-and-click flash game made by Ryan Khatam in 2003 about a badass stick figure who doesn't like playing by the rules. He doesn't get any deeper than that, really. Only two games were made about him, originally released in Newgrounds. The first one has him trying to rescue a little girl from thugs (after being paid a hefty sum of cash by the mother). The second one has him scouting out for Thug Incorporated, a gang that has it out for Johnny when he beat down the leader while buying drugs from him. A third game was planned and was intended to be much bigger than the first two,

but the Kickstarter campaign failed and the game was cancelled.

This flash game series has examples of: