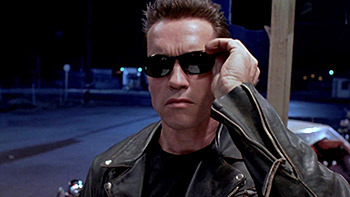 I can't see a thing!
Elwood: It's 106 miles to Chicago. We got a full tank of gas, half a pack of cigarettes, it's dark, and we're wearing sunglasses.
Jake: Hit it.
— The Blues Brothers
Advertisement:

Then there are times where a character wears glasses most of the time, if not all the time, even if it's impractical to do so. Sunglasses At Night is a trope where the glasses wearer is known for wearing their shades on even when it's nighttime, when they are fighting and in some occasions, when they are asleep. Most of these characters do it because of reason #2, but for others it is #3, or the whole thing is Hand Waved. Sometimes justified because the shades do something unusual. Other characters have enhanced senses, so they follow the first reason even at night. Many of the characters wouldn't be as recognizable without them.

A subtrope of Cool Shades and Useless Accessory. Compare to Sinister Shades. Named for, but mostly unrelated to, a song by Corey Hart.